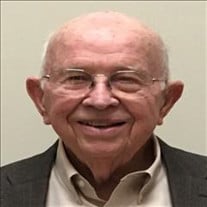 Frank Bruce Douglass, Jr. of Tulsa, Oklahoma departed from this life on Monday June 28, 2021 at the age of 91. He was born October 19, 1929 to Frank Bruce and Mary Elizabeth (Shoults) in Penalosa, Kansas. He had five sisters and was next to the last child. He grew up in Clearwater, Kansas and graduated from Clearwater High School where he played on both the Varsity Basketball and Football teams. Frank and Marcia Lee Potter married in 1949 and they had three children: Tom, Kirk and Jana. In 1953 the family was relocated from Wichita, Kansas to Oklahoma City and lived in the Mayfair area and later in the Village for many years. Upon Marcia's death in 1962, Frank struggled raising three children and working full-time without a life-partner. Then he met Opal Mae McMillan and fell in love again. They married on July 4, 1964. Opal had two sons; Mark and Michael. The family expanded to five children spanning over ten years in age. Opal provided the love and support Frank needed until his death one week prior to their 57th anniversary. He was active in various Independent Christian Churches for most of his adult life. He served as an Elder and Sunday School teacher for decades. Frank spent thirty-plus years working for Cities Service Gas Company and Williams Pipeline in Wichita, Oklahoma City, and Tulsa. Most of that time he was the Gas Measurement supervisor in the head office. Frank was the ultimate family-man. He raised his children to be the best they could be in every way. He never missed an opportunity to show his family by his own actions and instructions how to be a good citizen. He served as the moral compass and his children thank him today for being an excellent father. Frank is predeceased by his parents Frank and Mary; sisters, Bonnie Simpson, Betty Higgins, and Ruth Dorsett; and son, Kirk Douglass. Those left to cherish his memory are his beloved wife Opal; sons, Tom Douglass and wife Connie; Mark McMillan and wife Sherri; Michael McMillan and wife Linda; daughter, Jana Douglass Moore and husband Jack; sisters, Agnes Marx; Margarette Nease; nine grandchildren; nine super cute great grandchildren; and many friends he acquired over a lifetime of being a really great guy with a big heart. Family graveside services are planned at Memorial Park Cemetery in Oklahoma City, Oklahoma. A celebration of Frank's life is planned for 11:00 AM on Saturday July 24, 2021 at Cedar Ridge Christian Church in Broken Arrow, Oklahoma. To protect yourself and the family, face coverings will be required. We ask that you sit with your normal spheres of contact, as well as participate in contactless greetings. If you are running a temperature, feel unwell, or have been in contact with someone who has COVID-19, please know that you will be missed but we ask that you choose to stay home and rest. Memorials may be given in Frank's name to: The Prime Timer's Class at Cedar Ridge Christian Church 4010 W New Orleans St Broken Arrow, Oklahoma 74011 Frank's Celebration of a Life Well Lived will be live streamed at: Moore's Southlawn 918-663-2233

Frank Bruce Douglass, Jr. of Tulsa, Oklahoma departed from this life on Monday June 28, 2021 at the age of 91. He was born October 19, 1929 to Frank Bruce and Mary Elizabeth (Shoults) in Penalosa, Kansas. He had five sisters and was next... View Obituary & Service Information

The family of Frank Bruce Douglass, Jr. created this Life Tributes page to make it easy to share your memories.

Frank Bruce Douglass, Jr. of Tulsa, Oklahoma departed from this...

Send flowers to the Douglass family.