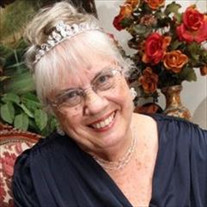 Mrs. Frankie May Warren, beloved wife, mother, grandmother, great-grandmother and great-great-grandmother, passed from this earth into the arms of Jesus this past Monday, Nov the 8th with her husband Cleo by her side. Frankie was born Nov 26, 1935 to Romie and Ellen Lewis in Beckley, WV. She was the eldest of 6 children: sisters Jessie and Shelby and brother Ronnie who preceded her in death and two brothers, Dave and Arvil. Growing up, Frankie's family eventually moved to Jackson, MI where she met and fell in love with Cleo Warren in high school. They were eventually married November 26, 1953 and settled in Michigan. Their first child, Vickie, was born April of 1955 and 2 years later in July, their first son, Ricky. Within a few years after Rick was born, Cleo and Frankie moved their little family to California to enjoy the warmer climate. Frankie gave birth to their second son, Micky, in July of 1961. When her children were small, Frankie was chosen to be on the TV game show "Queen For A Day" where she won numerous prizes. Frankie was a devoted wife and mother who prided herself in giving her children a loving home and instilling godly values. She was a woman of great faith. As Cleo and Frankie eventually moved and settled in Tulsa, OK it was important to her to find a church home. She found a family in Asbury United Methodist and remained a member for 45 years. As her family grew, Frankie worked in the banking and finance industry for many years and later began working for Union Public Schools as a nutrition server until she retired. She and her husband loved to travel the United States and did so in "RV" style. Taking the kids camping was a favorite getaway. Once retired, Frankie filled her days with her favorite hobbies. Working in the garden, playing in the casinos, decorating their home with auction antiques and taking Branson trips to name a few. She devoted time to favorite charities such as The Ronald McDonald House. But her favorite pastime was being a devoted grandmother to her five grandchildren and later great-grandchildren and one great-great-grandson. Frankie loved life and family. Her motto was to never leave without a hug for you never knew what the next day would bring. She lived a full 85 years leaving a legacy of love and wonderful memories to all those who knew her. We will forever remember her smiles, hugs, oatmeal bread, chocolate fudge, apple pie and a life we were blessed to know. Frankie May is survived in death by her husband, Cleo A Warren, with whom she would have celebrated 68 years of marriage this month on her 86th birthday. She is also survived by daughter, Vickie Smith and her husband Larry Smith who passed in 2017. Son, Rick A Warren and wife Sally Pulliam-Warren, son Micky A Warren and wife Debbie Gill-Warren. Grandchildren Sherre Warren, Jeremy Warren and wife Heidi, Amy Warren and husband Brian, Andrew Warren and wife Ericka and Alex Warren. Great-grandchildren Karma, Lynea, Logan, Landon, Lane, Luke, Levi, Kyrie, Jordyn and Parker. Great-great-grandchild Leo. Siblings Dave and wife Sally, Arvil and wife Stacy and many loved nieces and nephews. Funeral Service will be 2:00 P.M., Friday, November 12, 2021 at Memorial Park Cemetery Chapel, 5111 S. Memorial Drive, Tulsa, OK. Moore's Southlawn 918-663-2233

Mrs. Frankie May Warren, beloved wife, mother, grandmother, great-grandmother and great-great-grandmother, passed from this earth into the arms of Jesus this past Monday, Nov the 8th with her husband Cleo by her side. Frankie was born Nov... View Obituary & Service Information

The family of Frankie May Warren created this Life Tributes page to make it easy to share your memories.

Send flowers to the Warren family.