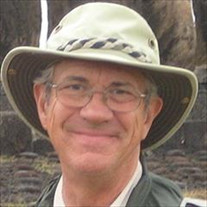 Fred N. Wightman passed away on December 4, 2021, after a brief bout with non-Covid-related pneumonia. Fred was born to F. Noel Wightman and Martha (Traughber) Wightman in St. Louis, Missouri, on September 23rd, 1946. His family moved to Tulsa in 1956. Fred graduated from Central High School in 1964. He attended Baker University, graduating in 1970 with a BS in biology. After graduation, he began teaching at Central High School in Tulsa, where he remained until his retirement in 1999. In 1971, Fred married the love of his life, Randi Stuart; they recently celebrated their 50th wedding anniversary. At Central, Fred taught life sciences and coached swimming and tennis. He also led the Central HS Ecology Club, with whom he developed an on-campus tree farm, banded prairie chickens, and maintained kestrel houses, among other endeavors. After retiring from teaching, Fred explored a passion for travel to obscure places, including Madagascar, Bhutan, Easter Island, and Antarctica. Fred was active in his community, serving on the boards of Tulsa Zoo Friends, Planned Parenthood, the Oklahoma Aquarium Foundation, and the Christian Service Board at First Presbyterian Church. He was a lifelong environmentalist. Recently, Fred received the NatureWorks Wildlife Stewardship Award and was named Landowner of the Year by the Oklahoma Department of Wildlife Conservation. Throughout his life, Fred was a true educator, and served as a mentor to students, friends, and family. Fred was preceded in death by his parents and his brother Rick Wightman. He is survived by his wife, Randi Stuart Wightman, their two children, Malcolm Wightman (Katrina) and Kate Vaughn (Lowell), his sister Nancy King (Jan), his brother Jack Wightman, three grandchildren, one great-granddaughter, and numerous nieces and nephews. Memorial service to be held at First Presbyterian Church of Tulsa on Saturday, December 18th, at 11:00am. In lieu of flowers, please consider donating to Planned Parenthood, NatureWorks, or Tulsa Zoo Friends.

The family of Fred N. Wightman created this Life Tributes page to make it easy to share your memories.

Send flowers to the Wightman family.