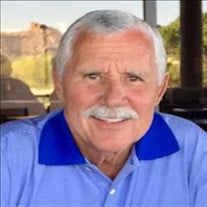 Fred E. Bosworth III (Edpa) A gift given to us all from 4-27-1947 to 2-18-2022 Edpa was born in Tyler, Texas to parents Patricia Reilly Bosworth and Fred E. Bosworth, Jr. where he immediately got busy living his big and loving life to it's fullest and continued sharing his enthusiasm for life, loved ones, and friends every day. Edpa loved the Texas Ranch- his beloved "5G Ranch"- where he would gather with family and dear friends in an always celebratory spirit! He made friends easily and quickly everywhere he went. He loved to travel- anywhere, anytime. And along his travels, he would always enter into new friendships and conversations with people on airplanes, in hotel lobbies, local diners, or poolside. In no time and without warning, they were now buddies. And once you were his friend, that meant something special. You were invited into a relationship that didn't give up, and a way of life that was joyful and had 'an extra gear!' Once introduced, people just always remembered him and received his zest for life and people which was always so genuine. it's unexplainable- it's just Edpa! After High School in Tyler, TX, Edpa attended Southern Methodist University in 1965. Next, he went to work for Braniff Airlines in Dallas, TX and was promoted to Station Manager for the airline, and lived in Weston, Missouri outside of Kansas City, MO. His position within the airline gave him the opportunity to travel the world and fostered his love for travel that continued all through his lifetime. Braniff eventually became Continental Airlines, and in 1980 Ed and his wife Heather Hoskins Bosworth moved to Kingwood, TX with their wonderful son, Tyler Bosworth. From 1983 to 1985, Ed lived in Saudi Arabia and worked for for a pipe fitting company- which was a true adventure that provided for many entertaining stories, and may have affected some international relations to this day- just sayin'- "Maybe." He returned to Houston, TX and began working for Friendswood Development Co., which introduced the Houston housing market to the concept of the planned community. Ed would continue his new home sales career in the Woodlands, TX with Lennar Corp. During this time, he received numerous awards in the state of Texas for top sales person of the year. In 1998 Edpa married Linda (Gee Bee to all who know and love her) in The Woodlands, TX. And in 2000, Edpa and Gee Bee moved to Tulsa, OK to be closer to her family. He made this move for the same reason he would do so many other things- "...because I love my wife." He was still close enough to go the the 5G Ranch and have many wonderful times with his brother Michael and his many Texas friends. At the same time, he enjoyed his Oklahoma family and immediately began collecting another cast of characters that would become lifelong friends and neighbors. Edpa loved his family and he was truly and fully loved by them. His enthusiasm, warmth, humor, generosity, and one of a kind spirit will always live on with each of us as it was given- as a gift from God. Edpa is survived by his cherished, loved, and loving wife Linda Bosworth- known by all family and friends as (his) "Gee Bee." We are all so grateful for the love, joy, and care shared between these special people- both leading us through life as a family. Edpa is also survived by his son, Tyler Bosworth and wife Hayden; son, Todd Carey; Daughter, Dayna Boynton and husband Jay T; brother Michael Bosworth and wife Susan; sister, Carolyn Fisk; sister, Sharon Friedrich; sister, Deborah Robertson; brother in law, Robert Maltby, Jr.; and loving Grandchildren, Kellan Bosworth, Reid Bosworth, Mac Milburn and wife Justine; Samantha Carey, Megan Milburn, Bennett Carey, and Toby Boynton. Survived also by many nephews and nieces, countless friends, and neighbors. Donations may be made to The Yorktown Benevolent Fund, a non-charitable gift, and mailed to Mr. Victor Johnson, 2121 S. Yorktown Ave., Tulsa, OK 74114; or to the American Cancer Society. We are so thankful for the amazing care and attention of all the doctors, nurses, and staff who treated Edpa- and of course became close friends along the way. We will remember Edpa not as a person that fought a worldly illness, but as an infinite Spirit and Child of God that will live on in Heaven and with us forever. Private Family Service. Moore's Southlawn 918-663-2233

Fred E. Bosworth III (Edpa) A gift given to us all from 4-27-1947 to 2-18-2022 Edpa was born in Tyler, Texas to parents Patricia Reilly Bosworth and Fred E. Bosworth, Jr. where he immediately got busy living his big and loving life to it's... View Obituary & Service Information

The family of Fred E. Bosworth, III created this Life Tributes page to make it easy to share your memories.

Send flowers to the Bosworth family.