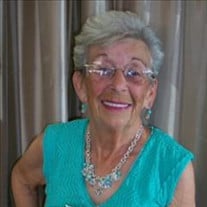 Gay Wilson went to her heavenly home on April 16, 2022, in Tulsa, Oklahoma after suffering a stroke. She was born on April 9, 1938, in Westville, Oklahoma to Maggie and Carl Gullett. She was a proud graduate of Stilwell, Oklahoma, High School, class of 1956. She met Charles Wilson in Tulsa, Oklahoma, and they married November 7, 1959, in Tahlequah, Oklahoma. She enjoyed being involved in her daughter's activities including, girl scout leader, softball coach, cheerleading sponsor and PTA President. When Charles retired, they traveled in their RV until Charles' passing in 1994. They made many new friends and she always had fond memories of those days. Gay loved to dress in bright colors and bling. From her jewelry to her shoes, she was always sparkling. She never met a stranger and enjoyed being around people. She was funny, witty, compassionate and a good friend to all. She was never afraid to give her opinion, but she was also a good listener. Her greatest gift was making those around her feel loved. She especially adored her three grandsons. Gay was happiest when she was surrounded by her whole family as she was recently on her 84th birthday. She was preceded in death by her parents, husband, Charles Wilson; sister and brother-in-law, Sue and Gary Bailey; sister, Patricia Gavit; brother-in-law, Jerry Wilson and great niece, Melizsa Mooney. She is survived by her daughters, Rhonda Wilson and husband, Kent; Carla Schnake and husband, Mike and Staci Regenhard and husband, Mark. Grandsons, Tanner and Cooper Schnake and Trenton Regenhard. Granddaughter, Elizabeth McDonell and children, Treyson and Jaleigh McDonell. Brother, Gene Gullett and wife, Joy; brother, Don Gullett and wife, Delores; brother, Larry Gullett and wife, Marilyn; sister, Nadine Rogers and husband, Mike and brother-in-law, Rodger Gavit and wife, Wendy. Brother-in-laws, Ronnie Wilson and wife, Connie; Larry Wilson and wife, Ruth; Lawrence Wilson and wife, Kathy, and sister-in-law Gladys Wilson. She leaves behind numerous nieces, nephews and many friends. Her love for them was unmeasurable. Memorial services will be held 2:00 PM Thursday, April 21st, at First Presbyterian Church, 709 S Boston, Tulsa, Oklahoma. Reception to follow. In lieu of flowers, contributions may be made in memory of Gay Wilson, to MD Anderson Cancer Center, P.O. Box 4486, Houston, TX, 77210-4486 or www.mdanderson.org/gifts. Moore's Southlawn Chapel 918-663-2233

Gay Wilson went to her heavenly home on April 16, 2022, in Tulsa, Oklahoma after suffering a stroke. She was born on April 9, 1938, in Westville, Oklahoma to Maggie and Carl Gullett. She was a proud graduate of Stilwell, Oklahoma, High School,... View Obituary & Service Information

The family of Gay A. Wilson created this Life Tributes page to make it easy to share your memories.