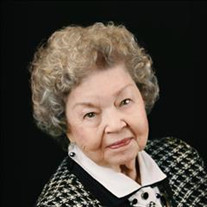 Geneva Jean Hackler March 20, 1932 to December 17, 2021 Geneva Jean Helt Hackler, 89, of Fredericksburg, VA, claimed her heavenly reward on December 17, 2021. Born in Tulsa, Oklahoma to Claude Ray Helt and Eva Boyd Helt. Geneva was known for her faith in God who saw her through many trials in her life. She lost her mother at 5 years old, was injured in a car accident at 29 that left her partially paralyzed from the waist down, was widowed at 50, survived three heart attacks, two strokes and COVID. She always dealt with what was given her with style and grace and passed her faith onto her children. She loved to laugh, play cards and all types of games with her children and grandchildren. She was an avid reader and she never had less than three books on her night table and in the living room. She always had to time to listen to anyone who needed to talk. Her family was always her biggest priority and joy. She had her first job at 16 at the TG&Y at Pine and Lewis in Tulsa. At 22 she started working for McDonnell-Douglas, in Tulsa. In the mid 60's the family moved to Muskogee and she and her husband started Hackler Construction, building custom homes. She returned to her beloved Tulsa in 1995 before moving to Fredericksburg, VA in 2005 to be near her daughter and several of her grandchildren and great-grandchildren. She was preceded in her death by her loving husband, Wendell G. Hackler; her parents, Claude Ray Helt and Eva Boyd Helt of Tulsa, OK and five of her siblings. She is survived by her younger brother, Dewey Helt (Sandy) of Tulsa, OK; two children, Deborah Hackler Bliss (Alan) of Stafford, VA and William Lee Hackler (Sherry) of Angleton, TX; five grandchildren, Angela Bliss Tolbert and husband Nathan of Orange. VA, Jillian Bliss Scott and husband Shawn of Stafford, VA, Jamie Hackler Stillwell and husband Jessie of Tahlequah, OK, Jason Morgan and wife Mary of Sapulpa, OK, Dustin Hackler and wife Lacey of Angleton, TX; seventeen great-grandchildren; five great-great-grandchildren and several nieces and nephews. The family will have a graveside service at Green Hill Cemetery, 1500 North York Street, in Muskogee Saturday, January 15 at 1:00 pm.

The family of Geneva Hackler created this Life Tributes page to make it easy to share your memories.

Send flowers to the Hackler family.