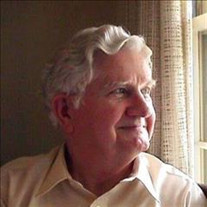 Our dad loved and was loved by multitudes of people. He never met a stranger. It has been a struggle to agree upon a suitable way to honor his memory in a manner this great man deserves. In light that Marty and family are still recovering from the covid that accelerated his homegoing, and the concern that this evil virus spreads so easily, we respectfully request that family who are comfortable with the idea, join us in person at Moore's Southlawn Funeral Home, Saturday, December 18. 2021, and the many others join us in heart and by live streaming beginning at 10AM. The Harry Thomas and Effie Gertrude (Epperson) Clark, children Gail, Ted and Sue were a family that treasured love and kindness. They welcomed a curly-tow-headed George Warren Clark as he took his first breath of Scott City, Kansas air September 2, 1925. The family soon moved to Wellington, Kansas, where daddy Tom, set up a barber chair in the front room to support his family at 25 cents a head. Gertie, a polio survivor, never complained at her own struggles, but cared for the home and 4 children, training them to always reach out to help and serve others. George spent time fishing, swimming in Slate Creek and playing ball, as well as helping the family by selling newspapers, performing odd jobs and working for the railroad. During WWII he served in communications. After the war, he graduated from KU, met and married the gentle, beautiful Bonnie Lee Holdeman. Children George David, and Mary Beth were born in Wellington. In 1952, George and Bonnie moved their family to Tulsa so George could work for brother Gail, who had opened a Beechcraft Aircraft dealership at the Tulsa International Airport. Martha Lynne and Timothy Warren were added to the family. George also added a law degree from Tulsa University. George led a very active lifestyle- swimming, dancing, golfing, bowling, fishing, boating, flying, gliding, scuba diving, bicycling, traveling, skiing, playing cards, drawing, photography, Bible study and memorization, prayer ministry, perpetual student, church visitation, prison ministry, visiting women's shelter, bus ministry, VBS, Bible teacher, deacon, elder, was active in a variety of community and service clubs. A major life change was in 1973, when co-worker and friend, Dick Freeman invited George to hear a new preacher at Eastwood Baptist Church; Tom Elliff was delivering the message. George and Bonnie came to visit and decided to stay and immerse their lives into their new church family. At one point, early on Brother Tom and George were having a discussion about how to know for certain you can go to heaven when you die. Tom shared truth from Scripture that day, and George secured forever his place in God's kingdom. George had always been a good man, but no one can do enough good actions to earn forgiveness of sin and adoption into God's family. Only through Jesus Christ can that be accomplished. George was faithful to carry that truth as often and to as many as he could. He would always recall with delight who had come up to him with a smile, a hug, a friendly word, a child-drawn picture after visiting church at Eastwood, or later in Mounds with us. He loved cards, visits, calls, ways to connect with people he loved and who loved him. When the spinal cord event, awaiting back surgery in 1992 left him paraplegic, he did not become bitter. When the medical team left him in wheelchair, he taught himself to walk again. When his beloved Bonnie was taken from in in 2010, he again refused to despair. When his confinement to bed began in May of 2019, still no complaints. As his world became smaller and smaller, he has kept his faith in Christ and love for family and he considered so many people his family. Even as dementia robbed dad of access to the volumes of Scripture implanted, he was able to recall a few, finally only one Scripture. He never complained pain or of the growing confinements. He continued even a recently as the week he contracted covid to be concerned about others being taken care of. He had frequent conversations to be sure this person or that one had plenty to eat, was taking care of responsibilities, was doing ok. George is survived by: 1 brother in law: Gene; 4 children: David, (wife Lili), MaryBeth (husband Dana), Marty (husband Ben), Tim (wife Martha); Honorary foreign exchange daughter Francie (husband Sandy); 10 grandchildren: Elisabeth, Marcie (husband Wayne), David, Katie (husband CJ), Sam( wife Amanda), Tim, Rachel (husband Kyle, Peter (wife Megan), Stephen, Jon (wife Aubrey); 12 great grandchildren; Chloe (husband Sam), Alexa, Wyatt, Hunter, Madeline, Harlie, Sailor, Rhiannon (husband Osoma),Reggie, Corrigan, Cassidy, Emilia; 2 great-great grandchildren: Nora, Ed. Multitudes of nieces, nephews, cousins, friends, caregivers. In lieu of flowers, the family suggests contributions to Eastwood Baptist Church or your favorite charity. A private family service is scheduled for Saturday, December 18, 2021 and webcasting of this service will be available on George's obituary page as of 10AM Saturday at www.moorefuneral.com. Moore's Southlawn 918-663-2233

Our dad loved and was loved by multitudes of people. He never met a stranger. It has been a struggle to agree upon a suitable way to honor his memory in a manner this great man deserves. In light that Marty and family are still recovering from... View Obituary & Service Information

The family of George W. Clark created this Life Tributes page to make it easy to share your memories.

Our dad loved and was loved by multitudes of people. He never...

Send flowers to the Clark family.