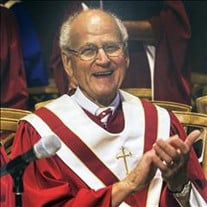 George Galen Strella went to be with the Lord on June 14, 2022. Despite numerous health challenges over the past few years, George maintained a joyful outlook and a grateful attitude. George was the son of the late Jim and Laura (Turner) Strella. He was born in Salina, Kansas on July 21, 1929, and graduated from Salina High School in 1947. Receiving a Navy ROTC Scholarship to the University of Southern California, George graduated in 1951 with a Bachelor of Arts degree in Cinema, and was a charter member of Tau Kappa Epsilon fraternity. He served in the U.S. Navy as an Officer for three years aboard the USS Juneau, in the Korean War and in the Mediterranean. It was aboard the ship, somewhere in the Pacific, that George accepted Jesus as his Lord and Savior on March 5, 1953. That day changed his life forever. In 1954, George married Jeanne Nettleton, of Topeka, Kansas, and they moved to St Louis, MO where he was Film Supervisor for KETC, the educational television station. Having always enjoyed math and science, George decided to change careers. In 1959 and 1962, George received Bachelor and Masters degrees in Civil Engineering from the University of Kansas, during which time he was associated with the Kansas State Board of Health in Topeka. He was later affiliated with the Consulting Engineering Firm of Greeley and Hansen in Chicago, Illinois for 3 years. In 1965, George was named Director of Water Pollution Control for Kansas City, Kansas, but then joined the Consulting Engineering firm of Holway Engineers upon moving to Tulsa, OK in 1968. In 1974, he was named as partner and Executive Senior Vice-President of Mansur-Daubert Strella Consulting Engineers where he was an expert in Water and Sewage-treatment projects. Active in several professional engineering organizations, George served as President of the American Society of Civil Engineers Tulsa Branch; State Director for the Society of Professional Engineers; American Consulting Engineers Council; President of Oklahoma Water Environment Association and National Director of Water Environment Federation. He also was a member of Kiwanis for 62 years, Past President, enthusiastic Song Leader for 54 years and very active member of the Downtown Tulsa Kiwanis Club. He was a Director of Full Gospel Men's Fellowship, a Worship Leader (with his wife, Jeanne, on the piano) at Tulsa Christian Fellowship, and a faithful member of First United Methodist Church Tulsa, where he served in the Cathedral Choir, on the Administrative Board and the Missions Council. Within the past few months, George was honored with a Lifetime Achievement Award from Kiwanis Club as well as an Emeritus Award for his volunteer work at Linnaeus Teaching Garden at Woodward Park. George's life's goal was for everyone he met to know his Lord and Savior, Jesus Christ. He truly had an attitude of joy that was not dependent on his life's circumstances, but was because he whole heartedly loved Jesus. George was predeceased by his wife of 57 years, Jeanne; son Steven; sister Virginia and brother Paul. George is survived by his nephew David Neal and his wife Laura, and their sons Tom Neal (wife Emily and son, Ryan), Carl Neal (wife Kimalee), and Sam Neal; niece Carole Jeanne Runnels and her husband David, and their children Emily, Joseph, and Jack; niece Virginia Anne Schwenneker, and many wonderful friends. The family will receive friends Monday, June 20, 2022, from 5-7 p.m. at Moore's Southlawn Funeral Home and a service celebrating George's life will be held at 1:00 p.m. on Tuesday, June 21, 2022, at First United Methodist Church, 1115 S. Boulder Ave. Tulsa.

George Galen Strella went to be with the Lord on June 14, 2022. Despite numerous health challenges over the past few years, George maintained a joyful outlook and a grateful attitude. George was the son of the late Jim and Laura (Turner) Strella.... View Obituary & Service Information

The family of George Galen "Georgie" Strella created this Life Tributes page to make it easy to share your memories.

Send flowers to the Strella family.