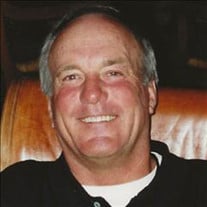 Glenn Reuben Davis Reuben Davis, 77 passed away on August 4, 2021 at home. A room vacant of anyone but Reuben was packed. Boundless energy, burgeoning plans and exploding enthusiasm were almost palpable wherever Reuben was. As Candy, his wife of 54 years and an equal in recounting hilarious stories always said, "Reuben was an event!" The life of Reuben Davis was audaciously defined by his "all in" attitude toward his family, the practice of law, commitment to the Boy Scouts of America, support of the law enforcement community and to participation in sports. He was a fierce but fair and honorable competitor who did nothing in half measure. He shepherded countless young men as the leader of Troop 1 at First Presbyterian Church and contributed greatly to the Tulsa County Sheriff's Office as a Reserve Deputy Sheriff. He never met a challenge he wasn't eager to tackle and he carried family and friends along through those challenges. Reuben converted challenges into adventures which always produced great endings and wonderfully humorous anecdotes. No one who knew him is without a classic Reuben story. His practical jokes were legendary. Carefully planned and meticulously executed, his schemes were incomparable. Reuben was in command and forever leading the charge. He was an original and completely unique man who added immeasurably to the lives of his family, friends and to the community as a whole. Reuben was born on November 5, 1943 in Muskogee to Glenn R. and Margaret Elizabeth Davis. He graduated from Tulsa's Edison High School in 1962 where he was a member of the school's swimming team. He earned a B.A. degree at Westminster College, Fulton, Missouri and was recognized as a Distinguished Military Graduate. His years at Westminster were tremendous ones where he built enduring and lifelong friendships. Following graduation from college, he received a commission in the U.S. Army and completed Airborne, Ranger and Special Weapons Schools. He served in Vietnam as an artillery battery commander and brigade liaison officer with the 101st Airborne Division. Reuben completed his service as an instructor of military tactics at Ft. Sill. He decided to pursue a law degree and earned his Juris Doctorate degree from the University of Oklahoma College of Law in 1973. He was inducted into the Order of the Coif and was managing editor of the Oklahoma Law Review. He enjoyed a long and distinguished career at Boone, Smith, Davis, Hurst and Dickman law firm. Sports and outdoor activities were always a focus in Reuben's life. He was an avid skier, hiker, runner, camping expert, golfer and fan of tennis. He especially enjoyed spending time with family and friends at the Wauhillau Outing Club and was a past president of the Tulsa Tennis Club. He planned and led numerous rigorous outdoor adventure trips to the Philmont Scout Ranch in New Mexico. At times it was difficult to determine who enjoyed the mountain climbing, rappelling and camping more, Reuben or the boys in the scout troop. Reuben is survived by his wife, Candy; son Clay and daughter-in-law, Elisa and their children Cole, Kate, Reagan, and Lauren; son Hayden, and daughter-in-law, Sarah and their children, Jack and Ellie; sister Mary Richie and four- legged kids Phoebe and Baxter. A Celebration of Reuben's life of vitality, integrity and imagination will be on August 20th at 4:00 pm at the Five Oaks Lodge, 528 East 121st St in Jenks. In lieu of flowers, contributions to Animal Aid of Tulsa, 3307 E. 15th St. Tulsa 74112 or to the Boy Scouts of America, 4295 S. Garnett Rd., 74146 would be appreciated.

Glenn Reuben Davis Reuben Davis, 77 passed away on August 4, 2021 at home. A room vacant of anyone but Reuben was packed. Boundless energy, burgeoning plans and exploding enthusiasm were almost palpable wherever Reuben was. As Candy, his... View Obituary & Service Information

The family of Glenn Reuben Davis created this Life Tributes page to make it easy to share your memories.

Send flowers to the Davis family.