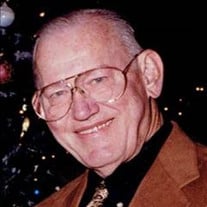 March 8, 1924, in Sulphur, Louisiana, a blue-eyed baby was born to Velma and Robley Drost. They named that little boy James Gordon and called him Gordon. Sister Peggie called him brother. Many years later, after he was wearing size 15 shoes and standing at 6'4", Bronwynn and Benjamin called him dad. Some called him uncle, some called him friend. Carol called him, husband. Grandchildren: Sam, Tim, Peter, and Rachel, grands-in-law Amanda and Megan, Kyle, and great grandchildren: Reggie, Cassidy and Emilia and Corrigan called him "Pa." Gordon Drost was an incredible storyteller, able to relate stories of times long ago and not so long ago carrying the listener with him almost to the point where they sense they had been there. He had volumes of stories about boyish pranks on chickens; high school football ending with a broken elbow; serving as a machinist in the United States Navy during World War Two. A heroic story of borrowing a boat to rescue his pregnant wife through a window to get her to the hospital in time for his son, to be born during a Louisiana flood; Gordon told hard stories of finding himself a widowed dad with two small children; stories of being a Bible teacher and deacon at the First Baptist Church in Lake Charles; admirable stories of studying by correspondence from a Pennsylvania College to earn a degree in Mechanical Engineering all while working full time at Cities Service. He told of travels around the country and around the world; One story is while living in Canada, in way below zero weather, Gordon was repairing his roof when he slipped and fell off. The fall knocked him out. When he woke up covered with frozen blood, he crawled into the house to let Carol know why he was late to lunch. It was confirmed to Carol by the hospital doctor that her husband indeed had a very hard head. He told stories his beloved dogs' antics; stories of the beauty of Alaska. Gordon learned early on a passion for working hard and well. He helped his folks on their farm, caring for the animals, including walking a plow behind a horse. Gordon developed ways to create tools or parts to fit the need. He was such a skillful creator, if a part was needed, he could design and create it. He loved traveling with Carol. They made friends everywhere they went. If anyone ever needed a friend, Gordon was ready and happy to help. He was an accomplished woodworker, an excellent grill chef, and Gordon always had his bottle of tobacco nearby to perfect the flavor. Gordon was a true man's man. He had enough interests to keep conversations going with just about anyone. He had great stories about hunting deer and ducks in Louisiana and Texas with son, Ben; hunting pheasant in Kansas; hunting grizzly in Canada. He loved fishing with a rod and reel, flounder fishing with a spear, and fishing for oysters. Pa took his family boating regularly in Lake Charles where they lived until 1968 when Cities Service transferred the Drost family to Tulsa for him to flourish as a mechanical engineer. When Cities Service merged with Citgo, then Occidental, Gordon was able to add more travel stories to his collection as he consulted around the world. If Gordon Drost had an opinion about anything, (and you know he did have opinions about most everything) you undoubtedly knew exactly where he stood. Gordon was not shy. He never lost his Louisiana manners, charm or accent. He had a great sense of humor; Loved his wife, Carol; loved the rest of his family, too; loved his friends, his country and delighted in his dogs. Losing his parents and sister, Peggie, was hard. Losing his only daughter, Bronwynn, in 2002 was a very hard time. Growing old and accumulating ailments was hard on this active man. His desire was to continue being active, but his body would not comply. We will all dearly miss him. We were not ready for him to leave us April 1st, after such a short period of decline. We are grateful for the conscientious care Gordon received at the Claremore Veteran's Center this past month. Viewing will be 12Noon-8PM, Thursday, April 7, 2022 at Moore's Southlawn, 9350 E. 51st, Tulsa, OK. Funeral Service will be 11:00 a.M., Friday, April 8, 2022 at Moore's Southlawn Chapel. Moore's Southlawn 918-663-2233

March 8, 1924, in Sulphur, Louisiana, a blue-eyed baby was born to Velma and Robley Drost. They named that little boy James Gordon and called him Gordon. Sister Peggie called him brother. Many years later, after he was wearing size 15 shoes... View Obituary & Service Information

The family of Gordon Drost created this Life Tributes page to make it easy to share your memories.

Send flowers to the Drost family.