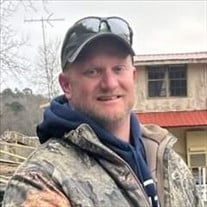 Grant Randall Frye was born October 6, 1978, in Tulsa, Ok. His proud parents Stephen and Susan Frye, and grandparents Chuck & Doris Frye, W.T. & Ann Basore were smitten with love. The first passion of Grant's life was mechanics, which first became apparent at age two when he removed the headlight from Aunt Martha's new car using a screwdriver. This was the first event in a pattern of disassembly, and as he grew older reassembly of household goods from lawnmowers to table lamps. Grant's other passions from early childhood were fishing and OU Football. These activities were shared with his dad bringing good times and good memories and appreciation for competitive spirit. He cherished this time in life! Grant attended school in Tulsa, graduating from Hale High School in 1997, where he made life-long, treasured friends. Grant's interest in car racing began in High School. This was one of the best times of his life and a high-risk activity that unnerved his mother. Grant received an Associate Degree in Applied Sciences at OSU Okmulgee in the Automotive Repair Program. Grant and Amber married September 25,1999 and welcomed their beautiful daughter, Sara Frye, August 15,2005. Sara has imagination and artistic skills beyond the rest of the family but also loved going with her mom to the track for the noise and excitement! Grant capped his racing adventure with race truck Mighty Whitey, setting a truck record at Tulsa International raceway. Less risky but highly competitive Grant began participating in bass fishing tournaments. His love of fishing both challenged and relaxed him for most of his life. The interest in fishing segued to a job with Navico in R&D testing new fishing equipment. This was almost too much fun to be considered work. A friendship there led to a job with Lufthansa Airlines in the hydraulics shop. During his time there, he formed lifelong friendships with his amazing work family, which helped to create a lighthearted environment. This job challenged and allowed him to utilize a lifelong skill in a new trade. At Same Day Auto repair, he advanced into management and went on to own his own shop. Grant built the biggest and most efficient shop of his dreams! His design included Pool & Air Hockey Tables, and Arcade Pin Ball & Pac Man for customers. Grant shared his life with many people. What his friends meant to him cannot be overstated. He loved family, his friends that became family, which provided nurturing and strength for his life. Grant was always eager to help a friend in need. His semiprofessional fishing experiences allowed him to help his friends advance their fishing skills. If you asked Grant, he knew all the fishing spots but rarely gave up his honey holes. On Aug 1, 2021, he married Christi Shires. A beautiful relationship ended too soon. Grant and Christi were able to realize their dreams of owning a waterfront house on Grand Lake. They spent most of the weekends there fishing, boating, and kayaking, he was always on the move! Grant went through hurtles from back surgery to cancer. Always a risk taker, he began to live his days to the fullest. Grant was known for spending money on experiences with those he loved. He enjoyed spending time with friends and family fishing, watching OU Football and more. Grant was preceded in death by his grandparents and father. He is survived by his wife Christi Frye, daughter Sara Frye, step children Robert Finnell and Alexis Shires, Mother Susan Frye, David and Sharon Frye, Carmen (Phillip) Rothlisberger, Katie (Damon) Stone, Ron & Barbara Frye, Anna Frye (Adam Hayes), Greg Frye, Mark & Maryanne Basore, Bill and Debbie Basore, Jessica (Matt) Gold, Tyler Basore, and numerous extended family members. Grant would wish you all the enjoyment of life. BOOMER SOONER!! Memorial service will be 1-5PM, Sunday, February 6, 2022 at Stokely Event Center, Tulsa, OK. Moore's Southlawn 918-663-2233

The family of Grant Randall Frye created this Life Tributes page to make it easy to share your memories.

Send flowers to the Frye family.