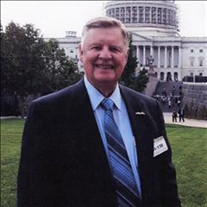 Harold Dean "Red" Statum DOD January 13, 2022 84 years 5 months 3 days Harold was born August 10, 1937 in Tulsa to Jim and Elva Statum. He attended Mingo Elementary and graduated high school from East Central with the class of 1956. Red married Althea L. Johnson on December 22, 1956. They were married 65 years. Red served in the National Guard and the Air Force Reserves from 1956 to 1961. He was employed by KTUL Channel 8 news starting in 1958, retiring after 50 years in 2008. Red won many awards for the work he captured on film and in photographs. He got to travel the world helping to cover news stories with the journalists on a local, national and international level. He met Presidents, Heads of State and celebrities. He had the most fun covering athletic events, mostly football and hockey. Red had many hobbies: woodworking, cooking, painting, trains, clock making. He rebuilt a red Volkswagen from top to bottom, including the interior. He rode motorcycles. He truly enjoyed getting his pilot's license and owned two planes. Red loved playing a round of golf and fishing with his son. He took great delight tending to his yard and took Horticulture classes to better learn about his grasses, many trees and plants. He grew a garden every spring, supplying all with the best tomatoes! Red was at one time a bee farmer. He raised cattle and Althea would name them after the channel 8 news anchors. Red built bird feeders, bird houses and bat houses, too. He kept the hummingbird feeders full. He even built some squirrel feeders to keep them out of the bird feeders. Red was a longtime member of the Catoosa School Board. He was a high school basketball referee. Red served the City of Catoosa as a Council Member and Mayor for 5 years. He was instrumental in getting new businesses to come and build across from the Hard Rock Hotel and Casino. He got a kick out of joining a ride along with the Catoosa Police. Red is survived by his wife Althea Statum of the home. Son, Jeff Statum and wife Shirley of Owasso. Grandchildren, Shane Statum and wife Kara, Stephen Statum and girlfriend Kayla Garcia, Hollee Statum, Nicholas Dirion and girlfriend Madison Salach, all of Owasso. Great-grandchildren, Hunter, Connor, Skyler and Aleah Statum, all of Owasso, Wyatt Dirion of Jenks. Red was preceded in death by his parents. Daughter Debi Jo Dirion, Grandson Philip Dirion and 2 great-granddaughters, Felicity and Riley Jo Dirion. Visitation will be 6-8PM, Tuesday, January 18, 2022 at Moore's Southlawn, 9350 E. 51st, Tulsa, OK. Funeral service will be 2:00 P.M., Wednesday, January 19, 2022 at Moore's Southlawn Chapel. Moore's Southlawn 918-663-2233

The family of Harold Dean "Red" Statum created this Life Tributes page to make it easy to share your memories.

Send flowers to the Statum family.