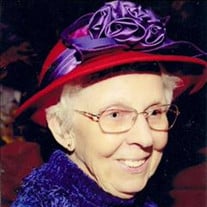 Harriet Cecilia Wilson (Smith) came into this world on August 21, 1927. She was born in John and Lillian Smith's bedroom, located in the small northwestern town of Ingersoll, OK. She joined her elder siblings, Johnny, Doraine, Marguerete and paternal grandmother Sophia. Three years later she had another sister, Dorothy, join the Smith family. Dorothy passed away at the age of 9, due to a ruptured appendix. Life was rough on the Ingersoll farm, no electricity, no running water, outdoor facilities, cows to milk, pigs to feed, chickens to tend, water to carry and animal byproducts to shovel. As her elder siblings Johnny and Doraine left home, Harriet and Margurete had to pick up the slack. Harriet walked to grade school in Ingersoll for her first eight grades and then caught the school bus to Cherokee, where she graduated high school in 1945. Harriet attended business school in Wichita, KS for a few months before taking her first paying job at a German Prisoner of War facility in Alva, OK. It seems a young dashing Max Wilson had managed to catch the eye of the striking young redhead, Harriet Smith, at a grade school basketball game. They were married in 1946, while Max was serving in the U.S. Navy. After Max was discharged from the Navy, the young newlywed Wilson couple moved away from NW Oklahoma to reside in Tulsa where Max attended Spartan School of Aeronautics. Max and Harriet lived in an apartment on Boulder Ave. and Harriet took a couple of jobs to help out while Max attended school. Harriet kept books for Dorothy's Dress Shop and also worked for State Loan and Finance in downtown Tulsa. In 1947, the young Wilson's were blessed with a bouncing baby boy, John. Max was hired by American Airlines, and sometime in the late 40s they purchased their first home on East Young St. in Tulsa. In 1951, a pretty little dark eyed baby girl joined the Wilson family, Maxine. When both children were in school, Harriet took a part-time job working in the school cafeteria at Whitney Jr. High, so they could have some extra income and still be home when the kids were. Harriet was member of Calvary Baptist Church on East Admiral where she always volunteered for their Vacation Bible School. Harriet also served as a PTA homeroom mother at her children's elementary school. Harriet was happy living in Tulsa, modern conveniences, paved streets, lots of friends, activities, LIFE WAS GRAND. Progress struck...Tulsa airport expansion and Hwy 11 were in the planning stage. Our neighborhood was on the chopping block. In 1961, the Wilson family relocated to a 24x24 garage a couple of miles south of Sequoyah School in Rogers County. For Harriet, it was like a journey back in time. No indoor plumbing, but there was electricity and Max promised there would be no cows to milk. There were animals to tend, even a goat or two that needed milking, but by then they had a son old enough to do those things( John). Things improved, indoor plumbing was added, another bouncing baby boy arrived in 1964 (Danny) and the 24x24 garage was enlarged and continued to be home for Harriet until July 19, 2021. Harriet's heart always belonged to Tulsa, but she persevered over in Rogers County. Harriet joined the Sequoyah Baptist Church and served as VBS director, Sunday School Teacher and Sunday School Superintendent until she was relieved of those duties for chaperoning a dance (Footloose). She also volunteered with 4-H Club, Rogers County Extension Club, Home Demonstration Club, Woman's Missionary Union Claremore Hospital, Hospice of Green Country, Rogers County Adult Day Care and possibly other organization we aren't aware of. Harriet lost Max in 1986 to the dreaded "C" word, but she cared for him in the home until it became physically impossible, she also did the same for her mother Lillian in her last years. In more recent years Harriet belonged to the Claremore Red Hatters Club, the Claremore AARP Chapter. She joined the Memorial Heights Baptist Church, was an officer of the Sam Sal's, and charter member of the Faithful Workers Sunday School Class. Harriet enjoyed traveling and would talk to anyone about anything. Harriet leaves three children and their spouses, six grandchildren, eleven great-grandchildren, assorted nieces and nephews scattered across the state and, countless friends. SHE WILL BE MISSED. Please donate to: Owasso Baptist Children Home or charity of your choice. Funeral Service: Private Family Service. Moore's Eastlawn Chapel (918) 622-1155

Harriet Cecilia Wilson (Smith) came into this world on August 21, 1927. She was born in John and Lillian Smith's bedroom, located in the small northwestern town of Ingersoll, OK. She joined her elder siblings, Johnny, Doraine, Marguerete and... View Obituary & Service Information

The family of Harriet Cecilia Wilson created this Life Tributes page to make it easy to share your memories.

Harriet Cecilia Wilson (Smith) came into this world on August...