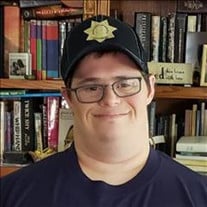 Ian was born the 6th of December 1980 in Philadelphia, Pennsylvania and was put up for adoption shortly after his birth. He became the first child of Robert and Susan Cowart when he was adopted by them and was 40 years old at the time of his passing. His infant brother, Christopher, and his sister, Rachel, grandma and grandpa Cowart, grandma and grandpa Tubb, and grandpa Silverman preceded him in death. Ian was born with Down syndrome but he never saw himself as being disabled. In 2001, he graduated from Madison Central High School in Richmond, Kentucky, where he had assisted the basketball team by providing water, towels, and motivation during their games. During half time, he would go onto the court and break dance to the sound of the Madison Central High School band. Following his dance performance, he would shoot baskets from the 3-point line, making more baskets than misses, while the students cheered him on. He continued his love of education when he began taking continuing education classes at Tulsa Community College, after moving to Oklahoma, and completed a cooking course at Tulsa Technology Center. From an early age and up to his passing he participated in Special Olympics in bowling, weightlifting, basketball and track and field events and enjoyed playing T-ball while living in Florida, and being on a local bowling league wherever he was living at the time. In his youth he was a Boy Scout and for his entire life, he was active in his church, The Church of Jesus Christ of Latter Day Saints. Ian was proud of his work as Dining Room Captain at Panera Bread on 41st Street and South Hudson Avenue in Tulsa and was excited that he would be celebrating eight years of employment this year. He took his work seriously, loved his co-workers and knew the names of many of the customers on sight; and the customers loved him. It was said that he lit up a room with his smile wherever he appeared. He was honored by the Tulsa Police Department and by the Tulsa Fire Department when he was made an honorary Captain. On thinking back on his life, Ian's sister Erin said, "Ian didn't have any enemies; only friends he hadn't met yet". Ian loved to dance and loved music and singing. He may have been tone deaf, but he made up for that in his enthusiasm when he sang. He had an amazing ability to figure out electronic equipment; usually figuring out how something worked while dad was still reading the manual. Ian contracted Covid and fought the disease for two months and just when it looked as though he had beaten it and was making good progress, he took a dramatic turn for the worse and passed away on the 16th of September. His passing leaves a big hole in the hearts of his family. But the knowledge that they will be a family once again in the eternities helps to ease the pain of loss. A viewing will be held Monday, 20 September, from 6 pm to 8 pm at the Moore Funeral Home, 9350 East 51st Street, Tulsa, Oklahoma 74145. A funeral service will then be held on 21 September at Moore Funeral Home at 10:00 am. Burial and a short graveside service will take place at the Memorial Park Cemetery, adjacent to the cemetery, following the funeral service. Moore's Southlawn 918-663-2233

Ian was born the 6th of December 1980 in Philadelphia, Pennsylvania and was put up for adoption shortly after his birth. He became the first child of Robert and Susan Cowart when he was adopted by them and was 40 years old at the time of his... View Obituary & Service Information

The family of Ian Michael Cowart created this Life Tributes page to make it easy to share your memories.

Ian was born the 6th of December 1980 in Philadelphia, Pennsylvania...

Send flowers to the Cowart family.