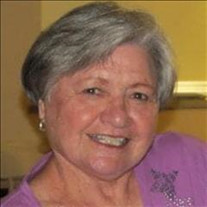 Nellie "Imogene" Ramsey passed away on July 21st, 2021 at the age of 89, in her hometown of Broken Arrow, Oklahoma. She faced challenges with dementia the past few years, and had resided in a memory care facility for the past year. Through it all, she kept her spirits up and maintained her feisty disposition. Imogene was born on August 6th, 1931 in Seymour, Missouri. She attended school there until graduation. Imogene grew up in a large family, including seven sisters and three brothers. Times were tough, but she always said there was a lot of love, and that's what mattered most to them. She met the love of her life, Bob, and they began a life together that resulted in a marriage of over seventy years. Imogene worked as a doctor's assistant to help support her husband while he worked toward his education and served in the Air Force over the next several years. They welcomed their first child, Steve, in 1960 in Springfield, Missouri and moved to Tulsa, OK two years later, where their daughter, Lori, was born. Imogene spent the next chapter of her life as a homemaker, and the best wife, mother and grandmother anybody could ask for. Imogene grew up knowing what hard work was and instilled a strong work ethic and good moral values to her children and family. Her commitment to her husband and family set the example to all who were fortunate enough to witness it throughout her life. Imogene loved her family fiercely and nothing meant more to her. Imogene was preceded in death by her mother, Carrie Cornelison; her father, Fred Cornelison; her husband, Bob Ramsey; her sisters, Esther, Magalene and Edna; and her brothers, Freddie and Raymond. She is survived by her sister Anna Louise Tucker of Twin Falls, Idaho; her twin sister Kathleen Sartin of Oskaloosa, Iowa; her brother, Jimmy Dale Cornelison of Derby, Kansas; her sister, Nancy Priboth of Bella Vista, Arkansas; sister Carol Bateman of Bella Vista, Arkansas; her son, Steve Ramsey; her daughter, Lori Richardson and husband, Bob; three grandchildren, Lindsay Little and husband Andy, Kyle Houston and wife Chrissy, Samantha Lee and husband Brad; seven great grandchildren, Kylie Houston, Kennedi Little, Callahan Houston, Drew Little, Connor Houston, Gracie Lee and Gage Lee all of Broken Arrow. Visitation services will be held Sunday, July 25th, 2021 at Moore Southlawn Chapel in Tulsa, OK from 3:00-5:00 pm. Funeral services celebrating Imogene's life will be held Monday, July 26th, 2021 at Moore Southlawn Chapel in Tulsa, OK at 2:00 pm. Moore's Southlawn 918-663-2233 share memories at www.moorefuneral.com

Nellie "Imogene" Ramsey passed away on July 21st, 2021 at the age of 89, in her hometown of Broken Arrow, Oklahoma. She faced challenges with dementia the past few years, and had resided in a memory care facility for the past year. Through... View Obituary & Service Information

The family of Imogene Ramsey created this Life Tributes page to make it easy to share your memories.

Send flowers to the Ramsey family.