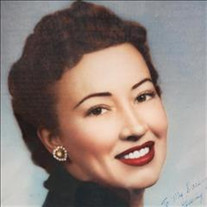 Isabelle Ann (Bingham) Lane 1930-2021 Isabelle Ann (Bingham) Lane, age 91 passed away peacefully on Sunday August 1st at St. Francis Hospital Hospice in Tulsa, Oklahoma. Upcoming Service: Internment at Ft. Gibson National Cemetery, 1423 Cemetery Rd, Fort Gibson, OK 74434, Friday August 13th at 1:00P.M. (Family and Friends are invited for this brief Service.) Private Memorial Service through the Jehovah's Witness Kingdom Hall (Date to be determined) Isabelle Ann (Bingham) Lane was Born in Elk Ranch Arkansas to Harry and Zefria Bingham February 23rd, 1930. She was raised in Branson Missouri. As a teenager she moved to San Diego California and later to Tulsa Oklahoma. She met and married her husband of 52 years (O.T. Lane) in San Diego, California. They were married in June of 1956 and remained married until his death in November of 2008. She is survived by one son Rocky Lane and Daughter in-law Judy Lane, one brother Harold Bingham and many loving nieces and nephews and grand nieces and nephews. She is preceded in death by her parents Harry and Zefria Bingham, five sisters, Dovie, Dollie, Lottie, Connie, Leola and four brothers Harry, Howard, Henry, and Joe Bingham. Mrs. Lane had many successful business careers in her life. Most notably before she met her husband, Ann as she was liked to be referred to, was a pioneer in circuit board design, construction, and assembly in the 1950's for early computers, missile tracking systems and avionics equipment. (Cubic corporation and Convair aeronautics.). She met and married career Navy man O.T. Lane in 1956 and also began the career of the wife of a military man. In 1959 her son was born, and she began her new career as a Mother. Later in life Ann ran an Elderly Nutrition Site for the City of Tulsa. Because of her involvement in this endeavor, she became a leader, spokeswoman and sounding board for older Tulsans for many concerns. Ann interfaced with many top Oklahoma political figures of the day to resolve issues for many senior citizens and helped shape the Senior Citizens Nutrition program for Tulsa's senior citizens. Her last career was as an owner along with her husband of Lane Painting and Decorating Company. A well-known remodeling company. In later retired life, Ann was a well-loved figure and icon in the neighborhood in which she lived. She became the neighborhood Mom. Never at loss for advice or words of encouragement she would try to help whom ever she could. In her younger days Ann loved to hunt, fish and camp out with the family and friends. Family reunions and weekend get togethers (large and small) were also her passion. She loved to cook big family dinners. In later years her hobbies became antiques and collectibles of all types. She loved to buy, sell and trade all types of items. Ann was a devoted member of Jehovah's Witnesses (Tulsa Kingdom Hall) and in her final years, Bible Study became a major priority in her life. She had many friends in the Kingdom Hall and kept up with them as she could. Isabelle Ann (Bingham) Lane will be missed by all of the family and friends that knew and loved her. In lieu of flowers please consider a donation to St. Francis Hospital Hospice (Tulsa, Oklahoma) Donation information below: To donate to Saint Francis Hospital Hospice Tulsa Oklahoma: If you or someone you know would like to be a Saint Francis Hospice donor, please send your tax deductible donation to the address below. Saint Francis Hospice 6600 South Yale Avenue, Suite 350 Tulsa, OK 74136 If your donation is in memory of a loved one, please include his or her name to the memo line of your check. We will send you a confirmation "Thank You" card after your donation is received. We will also notify the patient's family that an undisclosed amount was received in the honor of their loved one.

The family of Isabelle Ann Lane created this Life Tributes page to make it easy to share your memories.

Send flowers to the Lane family.