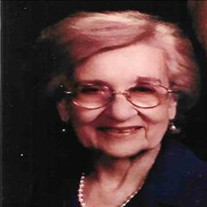 Iva Raye Stice passed away on Sunday evening, November 21, 2021, in Tulsa, OK. Raye was born April 15, 1929 to Ivie Don Bates and Esther Modena Bates (Kaylor) in Lavaca, AR. Raye grew up in several towns in and around the Fort Smith, AR area. It was in this area of western Arkansas that the two most important things in her life were about to happen. First, she found out that she loved playing the piano. She bought the only piano she ever owned while still a teenager and it is still in the family today. The second and most important thing to happen to her while living in Barling AR, she met the love of her life and future husband, Bobby Lee Stice. Bob was stationed at Fort Chaffee AR when an army buddy of his said "Hey, I've been dating this girl and she has a sister." The two army buddies drove to the Bates house and the rest is history. Bob and Raye were married in June 1949 and their journey in life for 72 years began. After Bob's discharge from the army, they traveled to Tulsa, OK for a brief time. The outbreak of the Korean conflict resulted in Bob being recalled for a second stint in the army and he was assigned to Fort Hood, TX. Raye followed with their young son, David Brent Stice, in tow. After Bob's second discharge from the army, the young family moved back to Tulsa to resume their life. While building their life in Tulsa, their second son, Stephen Courtney Stice. was born. As their family and friends grew, Bob and Raye found a church home and became life-long members of Sheridan Road Baptist Church (now Turning Point Church) when it was in its mere infancy and holding services in a tent at Pine and Sheridan. Their unwavering faith was extremely important to both of them their entire lives. Raye's skills with the piano and love of gospel music did not go unnoticed as she was the church pianist for almost 30 years. Raye held several positions when they first relocated back to Tulsa but found her niche when she began her career at Hillcrest Medical Center as a Surgery Secretary, a position she held for 20+ years until her retirement. After retirement, Bob and Raye traveled the world and had multiple adventures. Their favorite trip was a two-week vacation in Europe which Raye almost hated (she was afraid to fly over water) but she got over it. Staying land-based, they spent much of their time in Branson, MO. Bob spent his retirement years doing "Raye" projects and Raye always had "projects". Raye enjoyed traveling and visiting her brother, Larry Don Bates, and her sister, Laquita Yocum. Raye liked saying "I'm going to the East / West coast" and you knew who she was going to see. She loved her brother and sister and, just as importantly, her nieces and nephews. Raye truly loved spoiling her grand-daughters and her great-grandchildren. She always tried to teach them how to play the piano at every opportunity. Bob and her piano were her two greatest loves.` Preceded in death by her husband, Bobby Lee Stice, her parents, Ivie Don Bates and Esther Modena Bates (Kaylor), sister Laquita Yocum, and her beloved son, David Brent Stice. Iva Raye Stice is survived by her son, Stephen Courtney Stice and his better half Tracy Brantley, her three granddaughters, sons-in-law, daughter-in-law, and her great-grandchildren: Amy and Stephen Herring and their two sons Hunter and Brody Herring, Betsy Orbeck and her spouse Dee Orbeck, Meagan and Russell Blair and their two daughters Lauren and Madeline Blair. Raye will be greatly missed by her family, her friends, and her neighbors. Raye was loved by many. Her kindness and gentle spirit were an inspiration and a guiding light to us all. RIP Iva Raye Stice Viewing will be 10AM-8PM. Monday, November 29, 2021 with family greeting friends from 6-8PM, both at Moore's Southlawn, 9350 E. 51st, Tulsa, OK. Funeral service will be 10:00 AM, Tuesday, November 30, 2021 at Moore's Southlawn Chapel, Tulsa. Moore's Southlawn 918-663-2233

The family of Iva Raye Stice created this Life Tributes page to make it easy to share your memories.

Send flowers to the Stice family.