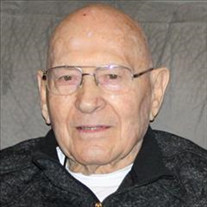 Jack Campbell, 96, passed away Wednesday, November 3, 2021 in Tulsa, Oklahoma. Born July 17, 1925 in Tulsa, Oklahoma to Fred and Mollie Bell Ward Campbell. He was preceded in death by his wife Catherine Sanchez Campbell. They wed November 30, 1946. Jack left high school in March of 1943 at the age of 17 (he later received his GED after returning from the war) to join the US Navy submarine service. He served the duration of WWII and after a few years back as a civilian he later joined the Navy Reserves. Jack stayed active for many years in the Submarine Veterans of WWII. He attended their conventions and functions and served as commander of that organization for a term. The Navy and Submarine Service were a very important part of his life. His stories of his time in the Navy showed his love of that life. Jack was instrumental in bringing the submarine "Bat Fish" to Muskogee. That submarine is on display and toured along with a series of plaques in the park honoring those submariners lost in WWII. He was the main force in the Bat Fish park and in making the plaques. Jack was a wonderful father who loved his daughters unconditionally. He loved life and had the unique ability to find humor in most every aspect of life. He accepted everyone he knew exactly as they were and without judgement. He grasped life with zeal and enthusiasm and never asked for more than he deserved, needed, or worked for. He helped anyone who needed it and asked for nothing in return. You never heard Jack speak ill of others. Jack worked for Manhattan Construction Company from his early twenties to his retirement in July of 1985. He started out working as a carpenter with his tools and worked his way up to Superintendent. He participated in the building of numerous buildings in several states. Among only a few was the original Sears building in Tulsa at 21st and Yale, The Ford Glass Plant in Tulsa, the OKC tunnels, the Oceanography & Meteorology building at Texas A&M University, St John's Hospital in Joplin, Missouri, power plants, and many, many others. Jack is preceded in death by his wife Catherine; his parents Fred and Mollie; brother Robert Campbell. He is survived by daughters Jacqueline Stobaugh (Charles) and Patricia Dean (Coy); grandchildren Richard Thomas (Diane), Tracy Bolding, Eric Dean, Jeffrey Dean (Tibi), Melody Dean, Mollie Dean; great grandchildren Madison Bolding, Jackson Thomas, Penelope Dean, Oliver Dean, Florence Dean. Viewing will be 12PM-8PM, Sunday, November 7, 2021 at Moore's Southlawn Chapel, 9350 East 51st Street, Tulsa, Oklahoma. Funeral service will be 2:00PM, Monday, November 8, 2021 at Moore's Southlawn Chapel. Moore's Southlawn 918-663-2233

The family of Jack Campbell created this Life Tributes page to make it easy to share your memories.

Send flowers to the Campbell family.