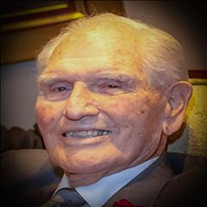 Jack Elwood Thomas was born in Antlers, OK on July 10, 1922. He passed away peacefully on August 5th in Tulsa, OK. Jack is preceded in death by his father Wash H. Thomas, mother Nellie "Hitch" Thomas, brother Wash H. Thomas,Jr., daughter Mary Jean "Jeanne" Thomas Meek, son Randall Elwood Thomas, and numerous aunts, uncles, cousins, nieces, and nephews. He is survived by his wife of 78 years Betty Jean Thomas of the home, daughter Debra Lynn Wagenblatt, her spouse David Allan Wagenblatt, son-in-law Maxwell Emerson Meek, and daughter-in-law Melissa Thomas. Jack is also survived by 9 grandchildren, 18 Great Grand Children, 5 Great Great Grand Children and several nephews and nieces. Jack, was a devout Christian and a very active member of East Side Christian Church for over 65 years. He served as Chairman of Board there, and was honored as Man of The Year many times. Jack, along with his wife Betty, raised their three children at East Side. Jack joined the US Army Air Corp (which later became the US Air Force) shortly after marrying Betty on April 25th, 1943. He served his Country as a pilot and 2nd Lieutenant. Jack and Betty moved to Stillwater, after his military service ended. He supported himself, his wife and child, while attending Oklahoma A&M (now called Oklahoma State University) by building homes and duplexes then selling them. Upon graduating from OSU in 1949, Jack and Betty moved their young family to Tulsa. Jack soon went to work for Dickason-Goodman Lumber Company. He worked there and for its subsidiary, Heritage Homes, building both spec and custom homes. Jack quickly earned an outstanding reputation for honesty, integrity, and quality work. In 1966, Jack decided it was time to for him to branch out on his own, and opened Jack Thomas Construction Company. He continued building homes, but within 6 months there was a slump in the economy causing new home construction to slow down tremendously. Jack, being the highly industrious, innovative man that he was, quickly switched the focus of his business to commercial construction. He continued to build some homes, which he designed himself, as well as expanding the commercial aspect of his business. In 1974-75 Jack moved the company to Broken Arrow with the primary focus being commercial construction, and ceased building homes.. His son Randy joined the company in 1974, and they successfully managed to expand their commercial construction to the construction of metal buildings. Jack was an active member in numerous organizations, such as The Tulsa Men's Club, Tulsa Homebuilder's Association, Gateway Foundation. and served on the board of directors of The First National Bank of Broken Arrow. Jack retired in 1986, and changed the focus of his life to fun things he enjoyed. He was an avid golfer and member of Cedar Ridge Country Club. He played there several times a week for years. At least that's what he did when he and Betty weren't busy traveling around the world on their numerous trips and cruises. Jack Elwood Thomas will be laid to rest Friday, August 13th, 2021. His burial will be a private event, followed by his service at 2PM at Moore's Funeral Home, 9350 E 51st, Tulsa, OK. In lieu of flowers, please make donations to St Jude's Research Hospital, 501 St. Jude Place, Memphis, TN 38105, (901) 595-3300. Moore's Southlawn 918-663-2233

The family of Jack E. Thomas created this Life Tributes page to make it easy to share your memories.