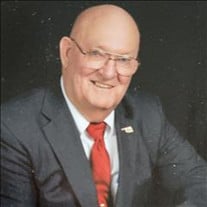 James Donald Duncan was born on July 10, 1932 and passed away on March 16, 2022 after a long illness at the age of 89. Born in Mulberry, Arkansas, James lived most of his life in and around Tulsa, Oklahoma. He met his future wife, Velda Waller, while square dancing and they were married 40 years. James was preceded in death by his parents, Richard (R.C.) and Neva Duncan, brothers Gaylus Duncan, Ray Duncan, and Robert Duncan, sisters Gwen Harbo, Ruth Rogers, and Sue Hager, and his wife Velda, who passed away on January 6th, 2022 after a brief illness. He is survived by his son and daughter-in-law, David Duncan and Terri (Bankhead) Duncan, daughter and son-in-law, Karen (Duncan) Schooley and Dave Schooley, his wife's daughter, Janet (Blair) Knoernschild and Tye Knoernschild, his brother Gayland Duncan and sister Emma Rombach. He is also survived by 10 grandchildren and 13 great-grandchildren. James enlisted in the Navy after graduating from high school, and was a proud Korean War Veteran. He spoke often of his visits to Japan, the Philippines, Hong Kong, Puerto Rico and Morocco. He worked in the automobile industry or a related career most of his working life, whether selling auto parts at Tulsa Automotive, selling Martin Senour automotive paint, or working as an auto service dispatcher at Premier Pontiac and many other auto dealerships in the Tulsa area. His last employer before retirement was the Oklahoma Department of Transportation, where he worked as a materials tester. After retiring from OKDOT, he started Jim's Floral Delivery, something he really loved doing. James loved square dancing and enjoyed socializing with his square dance club members and their families. He could strike up a conversation with anyone. He also loved his family very much, and was the co-host along with his wife, Velda, at many holiday and birthday gatherings. He will be greatly missed.

James Donald Duncan was born on July 10, 1932 and passed away on March 16, 2022 after a long illness at the age of 89. Born in Mulberry, Arkansas, James lived most of his life in and around Tulsa, Oklahoma. He met his future wife, Velda Waller,... View Obituary & Service Information

The family of James Donald Duncan created this Life Tributes page to make it easy to share your memories.

Send flowers to the Duncan family.