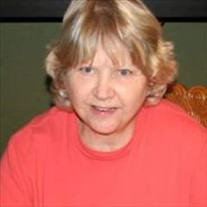 Janice Grace Alexander, daughter of Harry J. and Alta G. (Ivey) Caufield, was born October 1, 1945, in Lebanon, Missouri. She departed this life February 16, 2022, at the age of seventy-six years, in Tulsa, Oklahoma. On August 20, 1965, she was united in marriage to Virgil John Alexander in Springfield, Missouri. Shortly thereafter, they moved to Tulsa, Oklahoma, where they raised two daughters, Lydia Michele and Carolyn Christine. She worked in accounts payables/receivables at several companies, however, she retired in 2010 at Gunnebo-Johnson in Tulsa, Oklahoma, after nearly twenty years. She was a hard worker who always provided for and cared for her family. She was a devoted wife and mother who volunteered often for her daughters' extra activities. She was a Girl Scout leader and even a soccer coach for a couple of years. She enjoyed nature, especially in the Spring and Fall. She enjoyed listening to country and gospel music, watching Hallmark movies, Young and the Restless with Carolyn and Phyllis, and a variety of detective and comedy shows. She also enjoyed playing games and putting together puzzles with her family. She was an avid shopper and collector of Precious Moments, Christmas ornaments, purses, and blankets/throws. She was raised a Catholic, but later in life she enjoyed going to the Methodist Church. She was a member of St Mark's United Methodist Church in Tulsa, Oklahoma, for several years. She was a loving wife, mother, grandmother, great-grandmother, daughter, sister, aunt, friend, and neighbor. We celebrate her life and know that her family and friends will cherish the wonderful memories she created for them during her lifetime. She will be greatly missed. She was preceded in death by her parents; her husband; three brothers, Joseph (infant), Jerome, and Gene Caufield; and four sisters, Mary Caufield (infant), Kathryn Alexander, Margaret Biggs, and Ann Timmerman. She is survived by two daughters, Lydia Birk, and her husband, Jeff, of Grants Pass, Oregon, and Carolyn Dailey, and her husband, Shannon, of Tulsa, Oklahoma; seven grandchildren, Sara and Steven Birk; Mason, Savannah, Miles, Marshall, and Mackenzie Dailey; two great-grandchildren, Hallie and Payton Dailey; one brother, Jim Caufield, of Marshfield, Missouri; one sister, Carol Smith, and her husband, Gary, of Springfield, Missouri; a number of nieces and nephews; as well as a host of other relatives and friends. In lieu of flowers, you may send a donation to Ivey Cemetery, c/o Kevin Ivey, Treasurer, 501 Potters Road, Buffalo, MO, 65622. Please make checks payable to "The Ivey Cemetery". Thank you. Funeral Service will be 10:00 A.M., Thursday, February 24, 2022 at Moore's Southlawn Chapel, 9350 E. 51st, Tulsa, OK. Graveside service will be held 2PM, February 25, 2022 at Ivey Family Cemetery in Lebanon, MO. Moore's Southlawn 918-663-2233

The family of Janice Grace Alexander created this Life Tributes page to make it easy to share your memories.

Send flowers to the Alexander family.