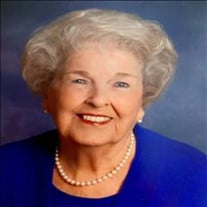 Jeannette Lillian Foster was born in Hutchinson, Kansas on February 5, 1925. She went home to the Lord Thursday evening, November 4, 2021 at the age of 96, surrounded by her children singing hymns. Jeannette was on hospice care following complications from a broken hip in September. She will be laid to rest next to her beloved husband, George, at Floral Haven Cemetery. Jeannette was a Kansas farm girl and always proud to be a "Sunflower Girl from the Sunflower State". She grew up during the Depression and later told her children exciting stories from her childhood; the escape from the turkey gobbler, the flood rescue, the dust storms, riding a horse in the peony fields. She met her true love, George Foster at a barn dance. As members of the Greatest Generation they parted for three years as he served with the Army in Europe during WW2. On his return they were married in Hutchinson on May 12, 1946. After college and two babies, George and Jeannette moved to Tulsa in 1951 to "seek their fortune." Ten years later they purchased a small plumbing supply company which grew into today's Heatwave Supply. Jeannette was first a stay-at-home mom, then an unpaid helper in the business, a volunteer at Hillcrest Auxiliary, a bridge player and always George's best friend. They shared a love of barbershop quartets and square dancing. Jeannette loved to travel saying she had "itchy toes". She explored the world with her husband and friends, children and grandchildren. Jeannette's faith journey began in a childhood Sunday School at a country church. She sang "In the Garden" in a girls' trio. There was a time when she was not around a community of believers, but God was always reaching out. Living across the street from a Presbyterian minister helped. In the late 1960's when she was overwhelmed with life she called out to God, "I can't do it. Help". She felt enveloped in a warm light and started praising. It was that moment she grasped the miracle of the transformed life. From that point on she grew in her faith through prayer meetings, Christian Women's Club, neighborhood Good News Club with her young daughter and just "helping." Later she and George found their church home at Harvard Avenue Christian Church where they drove Meals on Wheels, and helped house Laotian refugees. They treasured their friends in the "Disciples" Sunday School class. Jeannette lost her devoted husband of 58 years in 2005. Her church and family comforted her. She enjoyed the church's Tuesday Morning Book Club, continued driving Meals on Wheels (she was in her eighties!) and even insisted she was meant to provide after school care for her great-grandsons. Their school bus stopped at her corner. The boys remember their daily bacon snack as they all watched Jeopardy. In 2009 she survived a serious accident but recovered with the love and support of family and dedicated friends. In 2012 Jeannette moved to Crestwood, Oklahoma Methodist Manor where her next chapter began. She started her day with devotionals and prayer, then took part in the many activities there including water aerobics, bridge parties, weekly Bible studies and many volunteer opportunities. Having reached her nineties, she was losing many of her best friends. But at Crestwood she made new best friends, seven magnificent ones who dined and played together as they cared for one another. Jeannette, fondly known as "the lady with the laughing eyes", was recognized for her sweet spirit and warm smile. Jeannette is survived by her sister Louise Dietz and husband Dylce of Ottawa, KS; her children Linda Rice and husband Roland of Tulsa; her son Richard Foster of Las Vegas, NV; her daughter Laura Foster of Killeen, TX. Grandchildren Justin Rice and wife Stephanie, Wesley Rice and wife Robin, Matt Foster and Kate Foster-Gaska. Greatgrandchildren Roland Matthew, Hayden, Mary, Lucy Jeannette and Zoe. There will be a memorial service at Harvard Avenue Christian Church, 5502 S. Harvard at 1:00 PM, Friday, November 12. The service will be available to view on Youtube In lieu of flowers the family requests any remembrances be made to one of her favorite ministries: John 3:16 Mission @ 506 N. Cheyenne 74103 Literacy Evangelism International @ 1800 S. Jackson Avenue 74107 Salvation Army @ 102 N. Denver 74103 Harvard Avenue Christian Church, 5502 S. Harvard 74135

Jeannette Lillian Foster was born in Hutchinson, Kansas on February 5, 1925. She went home to the Lord Thursday evening, November 4, 2021 at the age of 96, surrounded by her children singing hymns. Jeannette was on hospice care following complications... View Obituary & Service Information

The family of Jeannette Foster created this Life Tributes page to make it easy to share your memories.

Jeannette Lillian Foster was born in Hutchinson, Kansas on February...

Send flowers to the Foster family.