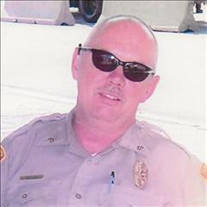 Jerry Don Holloway Jr. of Tulsa, OK passed away on Sunday, June 5, 2022, at his home at the age of 62. Arrangements are entrusted to the care of Moore Funeral Homes and Crematory. Jerry was born in Tulsa, OK to Jerry Don Sr. and Nina (Devin) Holloway on February 12, 1960. Jerry is a graduate of Will Rogers High School in Tulsa, OK. He worked for Tulsa County Sheriff's Office as a Deputy Sheriff for 29 years where many of his co-workers came to know him as "Hondo." During his 29 years with the Tulsa County Sheriff's Office he worked up to the rank of Captain before retiring. Jerry was an amazing man to work for and alongside. He was looked up to by so many deputies that he supervised during his time at TCSO. Jerry married Stacie (Ivey) Holloway March 6, 2009 in Tulsa, OK after meeting while they were both employed with the Tulsa County Sheriff's Office. Jerry loved to spend time outdoors cooking on his grill and smoker, going to the cabin with his sons, vacationing with his wife and kids, and spending time with his grandson, Kai. Jerry is survived by: his wife, Stacie, of Tulsa, OK; his children, Joshua and Monica Holloway of Sand Springs, OK, Jeremy and Tiffany Holloway of Noble, OK, Jordan Hillhouse of Tulsa, OK and Halle Giles of Tulsa, OK; his grandchildren Jacolby Ma'Kai (Kai) Ewings, of Tulsa, OK and Megan Reupert of Noble, OK; his brothers, David Holloway of Tulsa, OK, Jeff and Renee Holloway of Sand Springs, OK, Dustin and Alicia Holloway of Sand Springs, OK, Collin and Sheandara Holloway of Sand Springs, OK, and Craig Holloway of Sand Springs, OK; his sisters Janet Holloway-Potter of Tulsa, Brittney and Michael Crumb of Tulsa, OK; sisters-in-law Amanda (Ivey) Adcock of Tulsa, OK, Jennifer (Nikki) Ivey of Tulsa, OK and Angie Ivey of Clearwater, FL; 16 nieces and 12 nephews; 14 great-nieces and 12 great-nephews. He was preceded in death by his parents, Jerry Don Sr. and Nina Holloway. Honorary pallbearers include: Eric "Doc" Spyers, Michael "Mic" Bonin, Robert "Robbie" Meisinger, LaMont Hill, Jason Morrison, Julio Vega, Bradley Philpot, Ernest "Ernie" Mendenhall. Service: 2:00 p.m., Friday, June 10, 2022, Family Fellowship Church, 6105 West 36th St., Tulsa, OK with Pastor Jim Kent officiating. Moore's Eastlawn Chapel, 918-622-1155

Jerry Don Holloway Jr. of Tulsa, OK passed away on Sunday, June 5, 2022, at his home at the age of 62. Arrangements are entrusted to the care of Moore Funeral Homes and Crematory. Jerry was born in Tulsa, OK to Jerry Don Sr. and Nina (Devin)... View Obituary & Service Information

The family of Jerry Don Holloway, Jr. created this Life Tributes page to make it easy to share your memories.

Send flowers to the Holloway family.