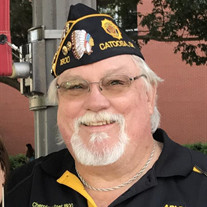 Gerald (Jerry) Lakey, 70, passed away Saturday, January 22, 2022 in Tulsa, Oklahoma. He was born to Willie B. Lakey and Era Mae Lakey (Cook) on December 23, 1951 in Sapulpa, Oklahoma. Preceded in death by his parents; brothers: Kenny Lakey, Billy Lakey and sisters: Colene Dearman and Glenda Price. Jerry is survived by his wife: Raylene Lakey (Broken Arrow); two sons: Cory Lakey Sr. and wife Alicia (McAllen, TX) and Chris Lakey and wife Tara (BA, OK); daughter: Casey Byrd (Lakey) and husband Nathan (KC, MO); sister: Wanda Miller and husband Davie; brother: Jim Lakey and wife Judy (Sapulpa, OK); 10 grandchildren and 1 great-grandchild. Jerry will be greatly missed by his family and friends. Jerry proudly served in the US Army as a Paratrooper with his brother Jim. After Jerry completed his military service, he went on to retire from Ford Glass Plant as an Electrician after 35 years. Jerry had more hobbies than a typical human being could have in a lifetime. He lived a very full life. Jerry was an athlete to his core; he played basketball and baseball through school. He continued playing softball and baseball well into adulthood. Jerry was a certified Scuba diver, a repeller (where he enjoyed repelling off of cliffs); he received his Pilots License in the early 90's. Jerry started his bowling career in 1978, which lasted until briefly before his passing. Jerry was even inducted into the Oklahoma Bowling Hall of Fame. He was an avid golfer and loved nothing more than playing a round of golf each week with his buddies. Jerry spent his lifetime in service for others. He has had more accolades than most people would see in a lifetime. Jerry had active roles and in most cases an "official" title in just about every single activity he was involved with. His activities included: Geocaching, Pokemon, Patriot Guard Riders (PGR), American Legion, OU FANatics of Tulsa, Blue Star Mothers, Women's Auxiliary, just to name a few. If Jerry wasn't busy doing one of these many things, he'd find a way to get involved with something. Jerry never met a stranger. Memorial Service: Cedar Ridge Christian Church 4010 W. New Orleans St. on Saturday January 29, 2022 at 2 o'clock in the afternoon. The family asks for everyone to wear anything OU or OU colors to the service for Jerry. Jerry will take his final ride to his earthly resting place at Fort Gibson National Cemetery in a private ceremony. Moore's Southlawn 918-663-2233

Gerald (Jerry) Lakey, 70, passed away Saturday, January 22, 2022 in Tulsa, Oklahoma. He was born to Willie B. Lakey and Era Mae Lakey (Cook) on December 23, 1951 in Sapulpa, Oklahoma. Preceded in death by his parents; brothers: Kenny Lakey,... View Obituary & Service Information

The family of Gerald Ernest Lakey created this Life Tributes page to make it easy to share your memories.

Send flowers to the Lakey family.