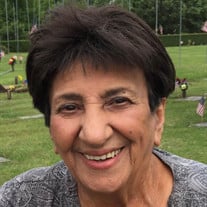 JOANN BAYOUTH NAIFEH - 89. passed away peacefully on July 16, 2021. JoAnn was born on July 27,1931, daughter of Solomon H. Bayouth and Salwa Andeel Bayouth in Collinsville, Oklahoma. She spent her childhood years in Collinsville surrounded by a close-knit family of 6 brothers and 4 sisters. She attended school and graduated from Collinsville High School in 1949. She went on to attend Northeastern Oklahoma State University where she received her Degree in Education in 1953. Immediately after college, she taught high school Physical Education in Monet, Missouri. A few years later, she moved to Owasso, OK to become a second grade teacher. She quickly became the most sought out teacher in Owasso, as some parents held their kids back so they could get "Ms. Bayouth" as their teacher. To this day, many of her students would come up to her and call her Ms. Bayouth and tell her they were her favorite teacher! JoAnn married her husband - Jimmie C. Naifeh on July 13, 1961 in Tulsa, OK. Together, JoAnn and Jimmie raised four children (Jimmie, Gina, Sally and Bradley) at their home in Tulsa until Jimmie, Sr. passed away on March 6, 2003. For years, their home was an "OPEN DOOR" for extended family members and friends to gather together at any time for no other reason than to just enjoy and strengthen their family bonds and friendships. JoAnn and Jimmie shared an amazing work ethic and developed a very strong bond with many citizens of Tulsa throughout the years, as they ran their family grocery businesses, which many Tulsan's fondly remember as Naifeh's Grocery and/or Naifeh's Pik-n-Pay. JoAnn was a founding member of St Antony's Orthodox Christian Church in Tulsa where she, at different times, taught Sunday School and also served as President of the Ladies Auxiliary. Until recent years she was a daily presence during the church's annual Hafli Lebanese Dinner where she created and was well known for her "Baklava Sundae". She was very proud of her Lebanese Heritage and also was a founding member of the Cedar Club and Salaam Club of Tulsa, which were devoted to maintaining and passing forward Lebanese cultural traditions. As a strong American Patriot, JoAnn was never hesitant to show her love and appreciation of God and Her Country. She was also a member of the University of Tulsa Golden Hurricane Club and an avid football and basketball fan for both Tulsa and the Oklahoma Sooners. JoAnn was preceded in death by her parents and siblings (Bill Bayouth of Jenks, OK; Louise Farris of Tulsa,OK; Kay Bayouth of Collinsville, OK; Abraham "Bus" Bayouth of Skiatook, OK; Inez Jones of Tulsa,OK, Juanita Jorishie of Tulsa,OK; Eddie Bayouth, Sr. of Sapulpa, OK; Emile Bayouth of Cleveland, OK and Delores "Dee" Sallee of Collinsville, OK.). She is survived by her brother - Tex Bayouth of Hominy, OK - as well as many nieces, nephews, extended family and friends who loved her dearly. JoAnn's surviving children and grandchildren are as follows: Jimmie C.Naifeh, Jr with his spouse Lorie as well as Jimmie's daughter Haley and her husband Logan Snodderly; --- Gina Poindexter with her spouse Mike as well as their children Michael and Brittani (plus Brittani's husband Rob Cockerham and their sons Conner and Carson); --- Sally Deeann Naifeh --- and Bradley C. Naifeh with his spouse Julie and their children Meaghan Reaves Warren (plus Meaghan's children Brady and Brooklynn), Mackenzie "Kenzie" Naifeh and Mason Naifeh (plus Addi Coday and their children Kyler and Khalia). Trisagion Memorial Service is at 6:30 pm on Monday, July 19, 2021 and the Funeral Service is at 10:00 am on Tuesday, July 20, 2021 at St. Antony's Orthodox Christian Church (2645 E 6th St, Tulsa, OK, 74104). In lieu of flowers, the family has asked that donations be made to St. Antony's Church.

The family of JoAnn Naifeh created this Life Tributes page to make it easy to share your memories.

Send flowers to the Naifeh family.