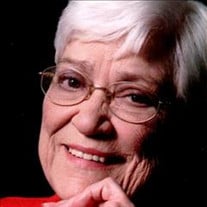 Joan Elizabeth Stadel Coffey, 91, died on Monday, October 11, 2021, at Aberdeen Heights Assisted Living in Tulsa, Oklahoma. Her son, Craig Jones, and daughter-in-law were at her bedside. She was born on March 25, 1930, to Clarence and Maye (Davis) Stadel in Hoyt, Kansas. She graduated as Valedictorian from Hoyt High School in 1947 and then attended Baker University, majoring in mathematics. She married Frank Jones in 1950, and they had a daughter, Michele Maye Jones, and a son, Craig Stadel Jones. In 1966, she married Lewis Ray Coffey and was blessed with the bonus of his 4 daughters: Sharon, Holly, Brenda, and Victoria. Joan and Lew enjoyed 37 years of marriage, living in Kansas, Illinois, North Dakota, South Dakota, Oklahoma, and Arizona, while pursuing Lew's banking and Joan's accounting careers. They were always active in a local church, and they were particularly involved with the Red Mountain United Methodist Church in Mesa, Arizona, where Joan served as church treasurer for many years and also sang in the choir. They enjoyed planning and attending jazz music festivals, traveling in their RV, and camping and playing unique card games with numerous friends. Joan was a rabid fan of Kansas University basketball, and she absolutely adored "her" Jayhawks! She is survived by her daughters: Michele Evans, Sharon (Leon) Niehues, Holly Neal, Brenda Coffey, Victoria (Steve) Aleman; and her son, Craig (Patty) Jones. She is also survived by 9 grandchildren: Jason, Craig, Ruth, Matthew, Evan, Nicole, Leah, Sean, and Rose of Sharon; 8 great-grandchildren; and numerous nieces, nephews, and their families. Joan was preceded in death by her husband, Lew; her brothers, DuWane Stadel and Clyde Stadel; her son-in-law, Jim Evans; and many extended family members. The family wishes to thank the wonderful staff of Aberdeen Heights, who embraced Joan for the final 3 1/2 years of her life, and the staff of Seasons Hospice for their care during the past 2 weeks. In lieu of flowers, the family suggests a donation be made in Joan's memory to either Red Mountain United Methodist Church (Mesa, Arizona) or a charity of your choice. Services will be held in Mesa, Arizona, at a later date

Joan Elizabeth Stadel Coffey, 91, died on Monday, October 11, 2021, at Aberdeen Heights Assisted Living in Tulsa, Oklahoma. Her son, Craig Jones, and daughter-in-law were at her bedside. She was born on March 25, 1930, to Clarence and Maye... View Obituary & Service Information

The family of Joan Stadel Coffey created this Life Tributes page to make it easy to share your memories.

Send flowers to the Coffey family.