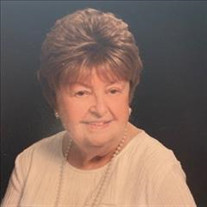 Joan Kathryn Kellenberger, 85, of Tulsa, died Friday, January 14, 2022. She was born August 7, 1936 in St. Louis, MO to John Morgan Dragoo and Verna Catherine McCorkell Dragoo. She married Gene Kellenberger on September 24, 1954 and was married for 67 years. Joan first worked as a secretary at Ft. Crowder prior to having children. After raising their children, she went to work as a loan specialist at the Department of Housing and Urban Development and retired in 2006 after 38 years. She became a member of the Highland Park Christian Church on January 1, 1963. She was also a member of the Daughters of the American Revolution. She enjoyed playing Bunko with her church friends for over 50 years. She loved to read and enjoyed volunteering at The Little Light House in Tulsa. She also loved watching her grandchildren and going to soccer, football, baseball, softball and basketball games to support them. She is survived by her husband Gene Kellenberger; daughters Pam Wheeler and her husband Greg, of Broken Arrow, OK; son Rick Kellenberger and his wife Julie of Broken Arrow, OK and Amy Petersen and her husband Johnny of Collinsville, OK. Grandchildren Gavin Wheeler, Amanda Keller and her husband Tommy, Brittany Wheeler, Melora Knoke and her husband Tyler, Kristen Kellenberger and her boyfriend Dave Parker, Tyler Petersen and his wife Marissa, Garrett Wheeler and his wife Chelsea, Dillon Petersen, Lane Petersen, Jaylan Wheeler and Keelan Wheeler and 16 great-grandchildren; She is also survived by a sister, Suzanne Kelly of Seneca, MO and many nieces and nephews. In addition to her parents, she was preceded in death by a brother, John Richard Dragoo. Visitation will be Thursday, 4-7 PM at Moore Southlawn Chapel, 9350 E. 51st St., Tulsa where the funeral will be held on Friday, January 21, 2022 at 2:00 PM. In Lieu of flowers, donations can be made to The Little Light House, Tulsa For additional information, call 918-663-2233.

The family of Joan Kathryn Kellenberger created this Life Tributes page to make it easy to share your memories.

Send flowers to the Kellenberger family.