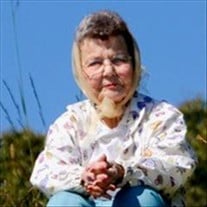 Joanna Rhea Huey Neely, 95, of Tulsa, Oklahoma, passed away Wednesday, April 27, 2022, of natural causes. She was born on September 7, 1926, in Belton, Texas at her family home to Robert and Leola Huey. She was their first born and would soon have a sibling when her baby brother, Robert Miller Huey, arrived a couple of years later. She enjoyed growing up in the beautiful hill country of south Texas and remembered fondly the Texas bluebonnets that were native to that area. As she grew, she made friends easily and was popular in school. She attended local schools in Belton and eventually graduated from Belton High School. Upon her graduation, she was awarded a scholarship to, and attended, the University of Mary Hardin-Baylor, a Christian college for women. By the time she was a young teenager, World War II was getting started. When she was in her late teens, the war had escalated and as a result, there were numerous young men that were stationed nearby in Austin, Texas. Joanna's lifelong friend, Marguerite Blackwelder, had met some of these young aviators at local USO events and thought one particular young man would be an ideal match for Joanna. It was then that Joanna met the love of her life, John Hatfield Neely. They were instantly smitten with one another and were married on January 6, 1946, in San Antonio, Texas. Four months earlier, World War II had ended so John and Joanna set out for Cleveland, Oklahoma where John's family had settled after migrating there from Cairo, West Virginia in the mid-1920s. It is a fact that Joanna married John and moved to Oklahoma without ever meeting John's family. There was no worry, though, as John's family instantly fell in love with the young girl from south Texas and was quickly adored by the Neely family. The feeling was mutual as Joanna became very fond of her new family, especially her mother-in-law, Pearl. At first, John and Joanna lived with John's parents but soon, they bought a small home in Cleveland near his parents' home. It was here that they would start their family. They welcomed their first child, a son, John Huey, in December 1946. They added to their family again in March 1949 when their second son, David Vincent, was born. John and Joanna eventually moved to Tulsa as John began his career in the banking industry. Joanna thrived by taking care of her family and having varied outside interests. Throughout her life, she derived joy from playing bridge on a regular basis with her bridge club, playing golf at the Oaks Golf Club and she took great delight in her sewing skills and embroidery work. She also became an excellent cook and baker. During holidays, she was known to be in the kitchen making special dishes and would readily share her recipes with anyone who was interested. As her sons grew, she delighted in participating in their school events and outside activities. She also worked outside the home at Westinghouse and at Memorial High School in Tulsa. She loved the work at Memorial the most. For many years afterward, she would reminisce about how much she enjoyed the students and faculty at the school. Her grandchildren, five boys and one girl, brought much pleasure to her. She enjoyed spending time with them and helping them with projects. One time, she helped one of them to bake a unique cake for a school contest that won first prize. Having grandchildren also meant that she had an opportunity to attend their various school functions and participate in their outside activities. Family was the center of her life. After John retired, they were able to travel for many years and enjoyed extended stays in Florida and a trip to Europe. She was a member of Asbury United Methodist Church in Tulsa and was a participant in their Seniors Choir, the Singing Ambassadors, for many years. She is survived by two sons, John Huey Neely and his wife, Joyce, of Edmond, OK and David Vincent Neely and his wife, Kathy, of Bixby, OK; a brother-in-law, Jim Neely of Tulsa and a sister-in-law, Jonnie Neely of Claremore, OK. She is also survived by six grandchildren, six great-grandchildren and several nephews and nieces. She is preceded in death by her husband of 75 years, John Hatfield Neely, who passed away one year prior to her death; her parents, Robert Mitchell and Leola Miller Huey; her brother, Robert Miller Huey; her in-laws, Abe and Pearl Neely; her brother-in-law, Paul Neely; her sister-in-law, Barbara Neely Randall; her brother-in-law, Arthur Randall, and her sister-in-law, Evelyn Mashunkashey Neely. Funeral services will be held Monday, May 2, 2022, at 10:00am at Moore Funeral Home in Tulsa. Burial to follow at Floral Haven Cemetery, Broken Arrow, OK. Moore's Southlawn Chapel 918-663-2233

Joanna Rhea Huey Neely, 95, of Tulsa, Oklahoma, passed away Wednesday, April 27, 2022, of natural causes. She was born on September 7, 1926, in Belton, Texas at her family home to Robert and Leola Huey. She was their first born and would soon... View Obituary & Service Information

The family of Joanna Huey Neely created this Life Tributes page to make it easy to share your memories.

Send flowers to the Neely family.