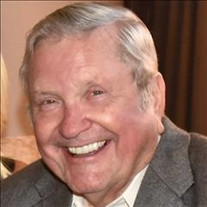 JOHN NASH PICKLE, JR. John Pickle, a long-time resident of Catoosa, OK, was lost on Thursday, August 26, 2021. He left his mark on the world with his vision and drive. John was preceded in death by his parents Nash and Anna Lou Pickle, sister Dorothy Nell Pickle Phillips, sister-in-law Kathy Driskel, nephews Denny Phillips and Craig Crockett. He is survived by the love of his life, Tina Pickle; three children, John Pickle III, Tiana Daugherty, and Christy Carter; grandchildren, Jennifer Pickle-Thrailkill, Josh Pickle, Kyle, Bryce, and Jacob Carter, Briana Daugherty; great-granddaughter, Alexandra Pickle-Thrailkill; in-laws, David Carter, Missy Pickle-Thrailkill, Ed and Suzy Crockett, Art and Judy Geary, Ron Driskel; as well as numerous nieces, nephews and extended family. Born November 11, 1937 in Hamilton, Mississippi on the Pickle family farm, he graduated from Aberdeen High School in 1955. He attended Mississippi State University. John joined the Army and served 6 months active duty with Company "D" in Ft. Chaffee, AR, where he won high score honors with the M1 rifle. He served the remainder of his enlistment as a reservist with the 457th Military Government Company. During John's work career he was an entrepreneur, inventor and businessman. From humble beginnings, he started and grew several businesses. He was the founder and owner of John Pickle Company, along with his wife Tina. The company began with 5 employees in a rented building in 1972. They concentrated on steel and structural fabrication, petrochemical pressure vessels and heat recovery steam generation equipment. The company was active for over 30 years and grew to employ more than 120 employees, expanding into the former CENatco facility on Charles Page Blvd. John also founded and owned Port City Plate Burning, which specialized in steel plate burning. The business was sold to his daughter and son-in-law, Christy and David Carter, in 1996. They grew and expanded the company by continually adding the latest in high tech steel processing equipment. It was renamed Port City Metal Services and is in operation today. In 1975, John and close friend, Rudy Foutz, started Ru-Jo Raceway. The 1/8-mile dirt race track was built on 20 acres of Rudy's farm land in Catoosa. At the time, most micro midget tracks were asphalt. The first season was "just for fun" Sunday afternoon racing. Scoring was done on Foutz's picnic table and seating was "bring your own lawn chair". In 1976, Ru-Jo installed grandstand seating, a loudspeaker system, pit board and lights. Racing was on Friday nights because most of the staff raced or worked at Tulsa Speedway on Saturday nights. The following year a communication system was installed that connected the scoring tower, pit board and flag stand. In 1979, BEFORE the first Chili Bowl, John and Rudy produced the FIRST indoor dirt-racing event for micro midgets in the Fairgrounds Pavilion. It was a four-race series in February, prior to the start of the regular season in April. At the 25th racing season celebration in 1999, RU(Rudy) and JO(John) were recognized for their contribution to what is now Port City Raceway. In 1976, Pickle Racing Products began building John's revolutionary designed micro midget race car. It had a left side mounted, stock motorcycle engine with a clutch, transmission and was fueled by gasoline. John initiated safety standards like the 5-point seat belt harness, neck brace, arm restraints and more clearance between the driver's helmet and top of the roll cage. It was the beginning of a new era for micro midgets and is now the benchmark. The company was sold and is now Sawyer Manufacturing. Although he was not a professional teacher as his mother and sister were, he loved to teach the practicalities of business, race cars, welding and many other topics. Anyone who knew John Pickle was aware of his colorful and entertaining storytelling abilities. One of his favorite stories used a rolling snowball as an analogy for running a business. He loved going to see his grandkids in their various activities, whether it was playing sports, the lead in a musical or racing cars. After John retired, his best "thinking time" was when he was doing his version of farming. This was riding his 60" lawnmower and mowing the house acreage and the north acreage with the practice racetrack. A Celebration of Life for John will be held Saturday, September 25 at 1:00 p.m. at Moore's Funeral Home - Southlawn Family Center. All are welcome to stay after for fellowship and snacks. In lieu of flowers, the family requests a contribution to the charity of your choice in John's honor.

JOHN NASH PICKLE, JR. John Pickle, a long-time resident of Catoosa, OK, was lost on Thursday, August 26, 2021. He left his mark on the world with his vision and drive. John was preceded in death by his parents Nash and Anna Lou Pickle, sister... View Obituary & Service Information

The family of John Nash Pickle, Jr. created this Life Tributes page to make it easy to share your memories.

Send flowers to the Pickle family.