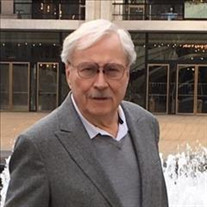 John P Young 4/6/38-10/14/21 Husband, Father, Grandfather, Great-Grandfather, Brother, Uncle and Friend. John lived in Tulsa most of his life; he graduated from Cascia Hall (Class of 1956) and the University of Tulsa (Class of 1964). He worked for MAPCO most of his career and was a pioneer in the field of computer science and programming. John was a longtime volunteer for Meals on Wheels and St. Francis Hospital. John and Barbara had a comfortable life and were well traveled; he spent much time enjoying golf and sailing. John was predeceased by his wife Barbara, his oldest sister and brother in-law Theresa and John Alloway and another sister and brother in-law Virginia and Herb Johnson, brother in-law Robert Krugman, and stepson Kevin Smith. He is survived by his children, Leslie Higdon and her husband Al, Catherine Young and her partner Robert Hill, Phil Young, Stepson Terry Smith and his wife Jonalyn. John is survived by his younger sister, Mary Young Krugman and her husband Barry Poskanzer. He is survived by many grandchildren, Megan Henderson and her husband Patrick, Catherine Massoth and her husband Landon, Leon Wunsch, Vanessa Kebert and her husband Cory, Cindy Ingram and her husband Terry, Brent Smith, Sarah Smith, Dustin Smith. John is also survived by great-grandchildren, Shepherd Henderson, Claire Massoth, Andrew and Carter Kebert, Taylor and Logan Ingram and Tristan Smith. Also surviving are many nieces and nephews and their children. His dog, Bosley, was his constant companion. He was very fortunate to have many friendships. Viewing Monday, Oct 18th 10AM - 8PM at Moore's Southlawn Chapel Graveside Service Tuesday, Oct. 19th - 2PM at Memorial Park Cemetery Memorials may be made to Meals on Wheels.

John P Young 4/6/38-10/14/21 Husband, Father, Grandfather, Great-Grandfather, Brother, Uncle and Friend. John lived in Tulsa most of his life; he graduated from Cascia Hall (Class of 1956) and the University of Tulsa (Class of 1964). He... View Obituary & Service Information

The family of John P. Young created this Life Tributes page to make it easy to share your memories.

Send flowers to the Young family.