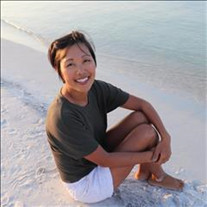 Jordan Sanders was one of a kind. She never met a stranger. After a more than 4 year journey with breast cancer, Jordan passed away at her home surrounded by family. She is in the Lord's presence now, in her perfectly healthy body, surrounded by family and friends that left this earth before her. She leaves a legacy of love, commitment, and service that will be missed by so many. Jordan Yoona' Sanders was born near Seoul, South Korea on April 7th, 1982. She was adopted by her parents, Mike and Joyce Ensley, on July 9th, 1982. After Jordan's adoption, the Ensley family lived in Talala for five years and then moved to Greencastle, IN and after living there for seven years, Mike, Joyce, Jay and Jordan moved back to Oklahoma, residing in Claremore. Jordan attended Claremore Public Schools starting in 7th grade through graduation and not only excelled in school but was a member of the Claremore High School cheerleading squad that won the 1997 National Championship. Jordan graduated high school in 2000, attended Oklahoma State University, earning a Bachelor of Science in Mathematics. Then without knowing what she wanted to do, Jordan moved to Manassas, VA where her sister, Jodie, and family lived, and taught high school math. Jordan and Chris have a unique love story. While the two were friends in high school, they did not know what their future would hold. In 2005, Jordan moved back to Claremore to teach high school math and coach the cheerleading team. Chris took notice of his "high school friend" Jordan after seeing her at a high school football game that Chris's brother Greg was playing in. Later that year Chris asked Jordan on a date at a basketball game and figured out soon they wanted to spend their lives together. While on a trip to Italy and Ireland, Chris asked Jordan, on the Spanish Steps in Rome, to marry him and she said yes. Chris and Jordan were married on October 21st, 2006 at the Vesica Piscis chapel in Catoosa. They made their home in Claremore before buying a house in Tulsa in May 2008. This family home was always full of love and fun because of the wife and mother Jordan was to us. Jordan was so beautiful inside and out. Chris will miss his partner in countless ways. From the simple things like taking care of the house, gardening, and attending the girls' events to building fires in the wood-burning stove and putting IKEA furniture together. Chris would be the first to say that Jordan is responsible for becoming the husband and father he is today. She always made sure the girls were doing their best in life as a whole, not just in their school work and athletics. She was an incredible mother to her daughters, leaving behind a legacy, encouraging them to grow up to be strong and caring contributors to the world. Jordan was an honest, open, and straightforward friend to so many and always knew when and how to help. She loved and cared deeply for her family and friends. Jordan's friends from grade school to the present have helped her and her family through this cancer journey and she was so thankful for that. She also had many interests and hobbies, including photography, cooking, and crafting. Living by the beach would have been her main hobby had she had the chance; that was her happy place. Jordan and Chris loved to travel to faraway places - Italy, Ireland, a honeymoon cruise to Caribbean islands. The family took several trips to the Florida beaches, California, plus their yearly trips to the Colorado mountains. Jordan loved and looked forward to her annual girls' trips to the beach also. Jordan and her family are members at First Baptist Church Tulsa, were part of several life groups, and together, Jordan and Chris taught in the 2-year-old pre-school room. Jordan was so honored to share a small part in guiding the children she taught towards Jesus. After her years in education, Jordan switched careers to follow in her father Mike's footsteps, entering the Oil & Gas business as an engineering tech for Samson Resources. She also worked for Laredo Petroleum, Rimrock Resources, and The Strickland Group. Jordan was a hard worker and used her intelligence to always look for a better way to work on a process. Her employers appreciated this, and she made many friends through work. In addition, Jordan was involved with her daughters' schools and attended many meetings and fundraisers in her spare time. Jordan was predeceased by grandparents Orlis and Christine Cox and Boyd and Mabel Ensley. Jordan is survived by her husband Chris Sanders and their three cherished daughters, Emmy Christine (12), Nora Lee (9), and Evelyn Mae (7,) along with her parents, Mike and Joyce Ensley, and in-laws Jerry and Dianna Sanders, siblings Jodie Gogis (husband Lukas and children, Grace, Grant, and Greta), Jim Ensley (wife Cathryn and children, Boyd and Elyse), and Jay Ensley (wife Eden and children Hays, Hallie, Hollis, and Hugh), along with many loving aunts, uncles, and numerous cousins and in-laws. Jordan's ashes will be scattered at three of her favorite places - her parents' farm near Atlanta, KS, in Granby, CO where they vacation in the summer, and on the beach at 30A, her favorite family beach area. Visitation will be held on Friday, October 8th, from 4 to 7 pm at First Baptist Church. A public memorial service will be held on Saturday, October 9th, 2021, at 2:00 pm at First Baptist Tulsa, 420 S. Detroit Ave., 74120. Donations in Jordan's honor can be made to Random Group of Gals ,Project 31 , and Lisa Bain Ministry . Contributions can also be made to Mighty Cause to help the family and for future education costs for the girls.

Jordan Sanders was one of a kind. She never met a stranger. After a more than 4 year journey with breast cancer, Jordan passed away at her home surrounded by family. She is in the Lord's presence now, in her perfectly healthy body, surrounded... View Obituary & Service Information

The family of Jordan Yoona' Sanders created this Life Tributes page to make it easy to share your memories.

Jordan Sanders was one of a kind. She never met a stranger. After...

Send flowers to the Sanders family.