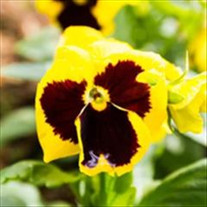 June Clair Jordan was given her angel wings on August 16th, 2021 at age 95. She passed with her daughter Kim and her granddaughters Dawn and Aimee by her side. June was born March 15th, 1926 in Kalamazoo, Michigan. She was adopted September 1, 1926 by Robert and Pearl Pattinson. She was raised by both her mom and step-dad Virgil Beaber. June married the love of her life Wilbur "Jim" H. Jordan Jr. on October 4, 1944 in New London, Connecticut. June was employed as a station secretary at Whittier Presbyterian Hospital and La Habra Hospital located in California. June's dream was to become a nurse, but after blowing out a window in the science lab, she decided to change her path. June had a great love for camping which led her to becoming a Girl Scout Leader. When June was 40 years old she was diagnosed with breast cancer and became a 55-year survivor! She took part in many Susan G. Komen Relay for Life events and donated regularly to the cause. After moving to Broken Arrow, Oklahoma, June worked at Wal-Mart as a door greeter, in the fabric department, and as a pharmacy technician. When June was not working, she spent her time volunteering at Immanuel Lutheran School as a door attendant in Broken Arrow, Oklahoma and as an Airport Ambassador with her husband at Tulsa International Airport. June loved going on cruises with her husband to travel the world. She enjoyed shopping, sewing, shopping, crocheting, shopping, playing bingo, shopping, reading medical mysteries, shopping while sipping margaritas, socializing at bunco, and most of all, she LOVED watching Shark Tank and cuddling on her escape cat Aurora while shopping in her spare time! Her feisty spirit made her a force to be reckoned with and her infectious laugh brought smiles to everyone she met. June was preceded in death by her husband, Wilbur "Jim" H. Jordan Jr.; daughter, Sandra Ayers McClintock; grandaughter, Loann Jordan; grandson, Waylon Jordan; and her four sisters, Maire, Doris, Louise, and Ruth. June is survived by her sons, Wilbur "Ric" Jordan and wife Karen and Kevin Jordan and wife Brenda; daughter, Kimberly "Kim" Baird; grandchildren, Dawn Anderson, Aimee Ayers, Callie Collins, Sara Jordan, Leonard Jordan, Daniel Jordan, Mathew Jordan, Robert Jordan, Samantha Jordan, and Cassie Baird; great-grandchildren, Alyssa Anderson, Kearsten Anderson, Madeline Patterson, Chelsea Patterson, Jordan Collins, Emily Baird, Jayssie Bluhm, Claire Bluhm, Lyllie Bluhm, Piper Bluhm, and Remington Joran. June's Celebration of Life will be at 10am, Monday, October 4, 2021 at Moore Funeral Home - Southlawn Chapel, 9350 E 51st, Tulsa, OK. In lieu of flowers please make donations to Susan G. Komen Foundation or the Tulsa SPCA in honor of June Jordan.

June Clair Jordan was given her angel wings on August 16th, 2021 at age 95. She passed with her daughter Kim and her granddaughters Dawn and Aimee by her side. June was born March 15th, 1926 in Kalamazoo, Michigan. She was adopted September... View Obituary & Service Information

The family of June Clair Jordan created this Life Tributes page to make it easy to share your memories.

Send flowers to the Jordan family.