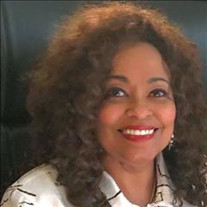 Early Wednesday morning, February 23, 2022, Karen Belinda (King) Pierce fell asleep in the Lord at the age of 65. She was a beloved and loyal wife, mom, Nae Nae, sister, sister-in-law, aunt and friend who had quietly battled breast cancer with unshakable faith and courage for the past three years. Karen was born in Washington DC on September 20, 1956 to Lawrence and Margaret King, an older brother Larry, and an older sister, Sheree. She was the baby of the family and relished that role. She spent her childhood in DC and went on to attend American University in 1974. While there, she spent her summers working with emotionally disturbed youth at DC General Hospital. Karen always loved people. Meeting new people, seeing old friends, asking them questions, telling them about the goodness of God. In 1976, she felt the call of God on her life and decided to move with her family to Oklahoma to attend Rhema Bible Training Center. She would often remark that these were some of the happiest days of her life. From the time Karen began her walk with the Lord until she took her last breath, she was joyously intentional about pointing others to Christ and encouraging them to fulfill God's call on their lives. People left Karen's presence uplifted by her words of love and inspiration. Karen saw value and beauty in every person she met. In 1984, she welcomed a daughter into the world, Princess (King) Hajjar. She treasured every day she had with Princess and always encouraged her to pursue God. She loved Princess' husband, Symon, as a son and found unspeakable joy in the time she spent with her grandsons, Isaac and Ezra. She was their Nae Nae and took care of them multiple days a week in their first years of life. Karen had a remarkable work ethic and was masterful at sales of any kind. There was no sales goal she couldn't reach whether it was cars, fine clothing, insurance, jewelry, rugs, make up, or furniture. She delighted in closing a deal, not only because she had a competitive streak, but also because she truly loved helping people find the things they wanted and needed. In 2014, Karen met the man who would become the love of her life, Steve Pierce. They would go on to marry at First United Methodist Church later that year where they were active members. They joyously celebrated their 7th anniversary this past August. Karen and Steve packed a lot of adventure into the time they had together. In addition to being Nae Nae and Pop Pop, they took a cruise to Paradise Island, Bahamas and multiple trips to Branson, Missouri and to Sarasota, Florida. They would eventually move to Sarasota and spend the last year of Karen's life there. Karen was preceded in death by her parents, Lawrence and Margaret King, and her brother, Lawrence Theodore King, III. Karen is survived by her husband, Steve Pierce; daughter, Princess Hajjar(husband and sons, Symon, Isaac and Ezra); sister, Dr. Sheree A. King-Perez (husband, Andres); nephew, Larry T. King IV; best friend, Dr. Connie Cole Jeske. Karen met a lot of strangers in her life, but they never stayed strangers for long. In the last few weeks of her life, she was quoted as saying, "When I leave you at the end of the day, I want to have met you. I think it's important to have made an impact on someone's life." Interment will take place during a private ceremony at Memorial Park Cemetery. Moore's Southlawn 918-663-2233

Early Wednesday morning, February 23, 2022, Karen Belinda (King) Pierce fell asleep in the Lord at the age of 65. She was a beloved and loyal wife, mom, Nae Nae, sister, sister-in-law, aunt and friend who had quietly battled breast cancer with... View Obituary & Service Information

The family of Karen King Pierce created this Life Tributes page to make it easy to share your memories.

Send flowers to the Pierce family.