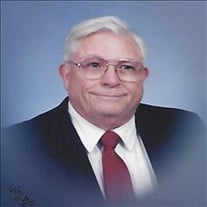 Kenneth Paul Jones, much loved son, husband, father, grandfather, and brother, went to be with his Lord and Savior on Thursday, June 24th, 2021 at the age of 86. He was born on August 10th, 1934, in Tulsa, Oklahoma to Ormond and Lenore Jones. Ken's family moved to the community of Oakhurst, Oklahoma when he was in his teens where he met Loretta Ragsdale at church. Ken graduated from Webster High School in Tulsa, Oklahoma in 1953. He and his high school sweetheart, Loretta Ragsdale, were married on June 5, 1953. They shared 68 wonderful years together. Ken is survived by his devoted wife, Loretta, of the home; his much loved daughter, Debra Fredette and her husband Paul; his son, David Jones; two wonderful grandchildren, Hannah and Jon Fredette; brother, Dean Jones, of Springdale, Arkansas; and several nieces, nephews, and cousins. Ken was preceded in death by his parents and sister, Shirley. Ken started working at an early age and continued working as long as his health permitted. At the age of 12 he started working as a shoe shine boy in a barber shop. He worked after school in high school and college and continued to work part-time after retiring from church ministry. After completing college and Southwestern Baptist Theological Seminary, Ken was a staff member at a number of churches in several states. He first served as Minister of Education and Music, and later specialized as Minister of Children and Preschool. He especially enjoyed working with Russell Dilday at Tallowood in Houston, and with Adrian Rogers at Bellevue in Memphis. While living in Memphis, Ken was also an adjunct professor at Mid-America Seminary. Ken was one of the first men in the Southern Baptist Convention to become Minister of Children and Preschool, and was asked to lead conferences in many states. In 1970 Ken was asked to come to England for a month to help Baptist churches and U.S. military chaplains make the transition in a change of literature and named change of various periodicals. Tallowood in Houston graciously gave him the time off. For almost ten years, Ken was a Sunday School curriculum writer for teachers of two and three year old children. For two weeks in the summer for several years he also directed a department for three year old children whose parents were attending Sunday School Weeks at Glorieta or Ridgecrest Baptist Conference Centers. One highlight of Ken's retirement was being able to make a trip to Israel. Ken and Loretta have been members at First Baptist Church, Tulsa, for over 25 years. Memorial contributions may be made to the Caring Center-First Baptist Church, 403 S. Cincinnati, Tulsa, OK. Viewing will be 12Noon-6PM, Monday, June 28, 2021 with family greeting friends from 4-6PM, both at Moore's Southlawn, 9350 E. 51st, Tulsa, OK. Memorial service will be 11:00 A.M., Tuesday, June 29, 2021 at First Baptist Church-Tulsa, 403 S. Cincinnati, Tulsa, OK. Moore's Southlawn 918-663-2233

Kenneth Paul Jones, much loved son, husband, father, grandfather, and brother, went to be with his Lord and Savior on Thursday, June 24th, 2021 at the age of 86. He was born on August 10th, 1934, in Tulsa, Oklahoma to Ormond and Lenore Jones.... View Obituary & Service Information

The family of Kenneth Paul Jones created this Life Tributes page to make it easy to share your memories.

Send flowers to the Jones family.