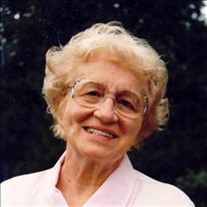 Lillian Hudacek March 29, 1926 - February 11, 2022 Be joyful always; pray continually; give thanks in all circumstances, for this is God's will for you in Christ Jesus. 1 Thessalonians 5: 16-18 Lillian Hudacek was born March 29, 1926, to Michael and Christine (Beechan) Sedjo in Chicago, Illinois. She passed away on February 11, 2022, at the age of 95, in Tulsa, Oklahoma, due to complications from the Covid-19 virus. In her youth she attended Scammon Elementary School and Carl Schurz High School and was active with her family at Immanuel Slovak Baptist Church in Chicago. She had fond memories of growing up with her cousins who lived close by, and summers at her grandmother's farm in Donald, Wisconsin. She married Emil Hudacek in August 1944, at New Covenant Baptist Church (formerly Immanuel Slovak Baptist Church). They raised their two children, Faith and Mark, in and around Chicago. Lillian worked in accounting departments at the Prospect High School cafeteria and United Airlines Executive Office in Mt. Prospect, IL. In the mid-1970s, Emil and Lillian moved to Sebring, Florida, where they owned and prepared taxes at H & R Block. In 1979 they sold the business in Florida and bought the H & R Block in Oak Harbor, Washington, living in Seattle in the off-season. In the early1980s they moved full time to Seattle to be close to daughter Faith and her family. Lillian worked in the University of Washington accounting department. She also worked for Pearson Tax Service in the Seattle office for over a decade, retiring in 2009, before her move to Tulsa, Oklahoma, to be near son Mark and his family. Lillian's family and faith were very important in her life. She was either reminiscing about prior family get-togethers or looking forward to the next family reunion. She made numerous photo albums for herself and her family which included photos of trips and activities she did with her grandchildren and great-grandchildren. And there was "Camp Nani Ha-Ha," where her great-grandchildren stayed with their Nani and she planned daily activities and visits to area attractions during part of the summer. While in Illinois, Lillian sang in church choirs, taught Sunday school, and was a leader for Pioneer Girls. In her Seattle church she played in the hand bell choir, worked with the children's ministries, and received training from Stephen's Ministries for one-on-one emotional and spiritual support for those dealing with grief and other difficult life situations. Meeting her small group for Bible study was something she held dear, especially after Emil passed away in 1996. She was active in Seattle's First Hill neighborhood and sang with Sweet Adelines International women singers. She enjoyed living in downtown Seattle where she was close to her church, the library, parks, stores, and places to meet friends. The Seattle/King County Metro bus system was her good friend; it was truly amazing how she could get anywhere she wished! Lillian always tried to see the glass half-full. She found joy in every phone call with family and friends, and often mentioned how thankful she was for the invention of the telephone. She found joy in traveling to visit family and friends in many places throughout the United States and in Europe, and was extremely thankful for the 50+ years of air travel provided by a job at United Airlines. She found joy in meeting her friends for coffee, and was thankful that she was able to do so. She found joy in finding so many different books at the library, and was thankful they were free to borrow. She found joy in seeing the beauty and variety of flowers and plants in a park, and was thankful for public access. Recently, she found the simple joy in feeding bread to geese in the park, and took pleasure in the fact that while the geese in a flock all looked alike, up close they looked and acted differently. Lillian is survived by sister Eleanor Kudela and sister-in-law Ruth Sedjo; daughter Faith (Herbert) Anderson; granddaughters Anita (Michael) Boser, Alisa (Scott) Burger, Alaree (Brian) Krigbaum, and Kerry (Bryce) Moore; great grandchildren Amanda (Bryce) Jacobson, Ryan (Megan) Boser, Jeff Boser, Kiara Hudacek, Isaac Hagens, Demora Kuskie, Rhianne Kuskie; great-great grandchildren, Beau, Aiden, Emil, and Lucas; and uncle Martin Beechen, age 98. She was preceded in death by her parents; Emil, husband of 52 years; son Mark and daughter in-law Kathi Hudacek; sister Rachael and brother-in-law Lee Woolf; brother Irving Sedjo; brother-in-law John Kudela; numerous aunts, uncles, and cousins. Lillian was laid to rest next to husband Emil at Hillcrest Burial Park in Kent, WA. A private family celebration of life service will be held in mid-May. Remembrances may be made to her favorite charity: Czechoslovak Baptist Convention c/o Mr. Larry Rucker 2222 Parkers Hill Dr. Maidens, VA 23102

The family of Lillian Pearl Hudacek created this Life Tributes page to make it easy to share your memories.

Send flowers to the Hudacek family.