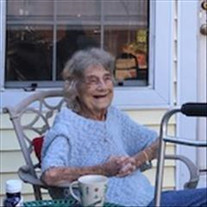 Linda Jolene Masias 17 Aug 1938 - 17 Mar 2022 Linda Jolene Masias was born in Ponca City, OK on 17 Aug 1938. Her childhood was spent in Miami, OK. After a brief period in Carlsbad, NM, she spent most of her adult life in Tulsa, OK until she moved to Sherman, TX for the terminal period of her life, where she passed on 17 Mar 2022. She was the daughter of Sid and Mildred Farley. Linda was an only child. She graduated from Miami (OK) High School in 1956. She went on to graduate from Northeastern Oklahoma University where she was a member of the drill team, the Norse Stars. While a member of the NEO Norse Stars, the drill team performed at the opening of the National Cowboy Hall of Fame in Oklahoma City, OK. She also attended Oklahoma State University. While attending OSU, she met her future husband, Gene. She knew she would marry Gene after their first date. Linda and Gene were married for two weeks shy of 58 years, when Gene passed in November 2018. She raised two children and stayed active by volunteering and supporting her children's extra curricular activities. She worked at Southwestern Bell as a secretary after the children left home. Linda was an avid bowler as a young adult. She used a bowling ball named Doris and regularly bowled 3 game series with scores totaling more than 600. She was just as avid a bridge player as she was a bowler. She and Gene regularly played raucous games of bridge late into the weekend nights with a variety of friends. In her middle adult years, Linda and Gene created "Nanner's Darlin's", little wooden bunnies, each one having their own personality. Nanner's Darlin's were sold to craft stores all over the United States. During this time they began clogging and formed a group dubbed "The Miscues." The Miscues were invited to clog at festivals all over the State of Oklahoma, once even clogging for the governor. She loved her Oklahoma State Cowboys and supported them in whatever sporting event was in season. She would tell anyone that would listen, that she bled orange. She and five of her college friends called themselves the "Goofies" and would get together for a weekend to visit, laugh and watch big OSU sporting events together. She had a passion for collecting antiques and amassed quite a collection over the years. Linda was a dog lover. She supported a variety of veterans' groups. But, she especially loved her five grandsons. She travelled all over Oklahoma and Texas to watch them participate in their activities. Linda could be heard over the rest of the crowd cheering on her grandsons at whatever endeavor they pursued. In the terminal phase of her life, she moved to Sherman, TX to be with her son's family and the rest of what she called her "Texas" family. There, she enjoyed having a puff on her cigarette and a cup of coffee in the backyard, making new Texas friends, talking on the phone with her Oklahoma friends, and watching sports and Jeopardy on TV. She especially enjoyed listening to her granddaughter's daily vocal and piano practices, after which Linda would encourage her with applause and shouts of, "Bravo!" Linda enjoyed having the family dog, Louis, (who she called Little Man because he was so small), sit in her lap so she could pet him. Linda was a life long Christian. She spent this period of her life getting closer to the The Lord. The Lord blessed Linda with many gifts in life but one of the last gifts He gave her was the ability to spend this terminal phase of her life enjoying her great granddaughter. Linda was preceded in death by her parents, Sid and Mildred Farley, her husband, Gene Masias and her granddaughter, Christina Masias. She is survived by her daughter, Shelley Ogan and her son, Martin Masias and his wife, Erin, by five grandsons, Daniel Patten, Justin Masias and his wife Hallie, Evan Taylor, Mitchell Masias and his wife Ashley, Trevor Masias and his wife Rachel, granddaughter, Averie Attaway and great granddaughter, Evelyn Ruth Masias. Visitation will be from 5:00 PM to 7:00 PM on Wednesday, March 23rd at Moore Southlawn Chapel, 9350 East 51st Street, Tulsa, OK. The funeral service will be held the following day, Thursday March 24th beginning at 2:00 PM in the Memorial Park Cemetery Chapel, 5111 S. Memorial Drive, Tulsa, OK. For additional information, please call Moore's Southlawn at 918-663-2233.

The family of Linda Jolene Masias created this Life Tributes page to make it easy to share your memories.

Send flowers to the Masias family.