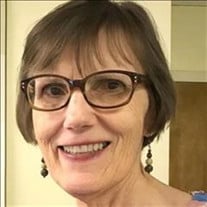 Linda Evelyn Mahoney Watts was born June 7, 1948 in Deadwood, South Dakota, the nearest hospital to Hulett, Wyoming where her parents Evelyn and Edward Mahoney resided. They relocated to Tulsa, Oklahoma where Linda attended Hoover Elementary, Eli Whitney Junior High and graduated from Nathan Hale High School in 1966. She was a charter member of the Tulsa Youth Symphony and later first chair string bass at Oklahoma State University and the University of Tulsa. After she married Gary in December 1968, she continued her education at Temple University and the University of Pennsylvania graduating with a Bachelor's in Social Science in 1972. After their son, Ethan, was born in Philadelphia, Linda and Gary moved back to Tulsa in 1973 and later had daughter, Fritha, and son, Dylan. Linda was a founding board member of Emergency Infant Services (EIS) in 1977, serving as the first President of the Board. After years as a volunteer at EIS, Linda became Executive Director in 1983. After seeing EIS through growth and a move from Second Presbyterian to the First Presbyterian Bernsen Center location, in 1998 Linda's role with EIS changed to Director of Social Services. Linda worked at EIS until its 40th Anniversary in 2017. Linda also volunteered with Helpline, Buckle Every Little Tot (BELT), Campfire Girls, Barnard Elementary, and College Hill Presbyterian Church which she and Gary have attended since 1973. At College Hill, Linda was a Sunday School teacher, member of the choir, ordained elder and member of the Session, and enjoyed many social groups including the book club. Linda and Gary enjoyed traveling across all 50 states of the U.S., Canada, Mexico and Europe, often traveling with family and visiting family and friends. Linda loved spending time with her grandchildren, Sofia and Jesper, attending their sports and school events, traveling, and just making fun at home. Linda found much joy in music, books, and animals. Linda is predeceased by her father, Edward Mahoney. Linda is survived by her husband, Gary Watts; children, Ethan (Manuela) Watts, Fritha (Patrick) Ohlson, Dylan (Belle) Watts; grandchildren, Sofia Ohlson and Jesper Ohlson; mother, Evelyn Mahoney; brothers, Roy (Rita) Mahoney and Bruce Mahoney and sister, Sandra Taylor; brother-in-law Clayton (Kathy) Watts; and many nieces and nephews and great nieces and nephews. A service for Linda will be live-streamed (and available later) on Thursday, August 19, 2021, at 6:30 pm, on the College Hill Presbyterian Church Tulsa YouTube site LINK . In lieu of flowers, you may choose to honor our remarkable wife and mother with your financial donation to Emergency Infant Services, College Hill Presbyterian Church, or the Alzheimer's Association.

The family of Linda Evelyn Watts created this Life Tributes page to make it easy to share your memories.

Send flowers to the Watts family.