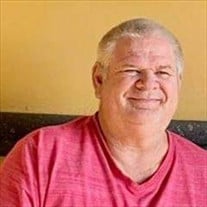 Mark was born June 11, 1962 to William (Bill) and Louise Bevan, in Pryor, Oklahoma. He left this world to be with his Heavenly Father on June 17, 2021 at the age of 59. Mark graduated from Will Rogers High School in Tulsa, OK. In 1985, Mark and Karen (Barrett) were married. In their early years of marriage they enjoyed serving as chaperones on several trips for the teenage Girl Scouts. Mark has had many careers. He worked as a plumber for many years and more recently, helped keep the business economy moving as an escort vehicle driver, a specialty freight driver, and as the family rental property manager. However, the thing that Mark might be best known for is cooking corn at the Tulsa State Fair and occasionally at other festivals. While it was grueling work with long days, he enjoyed spending time with coworkers, meeting new people, and the festive fair atmosphere. He thoroughly enjoyed that lots of people thought his was the best Fair Food. Many friends and family have similar memories of Mark as unwaveringly helpful and being hard working. These memories range from getting repair parts for his "running buddy" Mike, to building a ramp and assembling a swing set for his family. All tasks were often completed with the help of his friend, Ron. Mark loved his children and their spouses and was very proud of their achievements. He spoke of his son Seth as someone who could make a computer do anything and of his daughter Mary as someone who would change the world. Of his wife, Karen, he was aware of the challenging and life-changing work she did with "her kids" as a teacher. Most of all his grandchildren always held his heart. Mark loved his friends as his chosen family. Mark was preceded in death by his parents Bill and Louise Bevan. Surviving family includes: wife, Karen, and their children, Seth and his wife Mariah Bevan and daughter Ava, and Mary and her husband Wyatt Honsinger and son Carter; his sister, Penny and her husband Mark Rose; his brother, Gaylon and his wife Sandra Bevan; as well as many nieces, nephews, other extended family and many friends. Funeral services will be 10AM, Saturday, June 26, 2021 at Moore Funeral Home - Southlawn Chapel, 9350 E. 51st, Tulsa, OK, 918-663-2233

The family of Mark Bevan created this Life Tributes page to make it easy to share your memories.

Send flowers to the Bevan family.