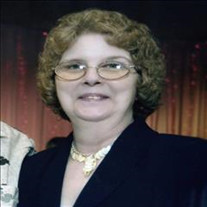 We regretfully announce the passing of Marcia Jean Weir-Connell, 74, resident of Tulsa, Oklahoma, on Friday, September 17, 2021. Marcia was surrounded by her family and passed away peacefully in her home. Marcia was born on December 12th, 1946 to Donald and Ione Craig in Mason City, Iowa. She moved to Tulsa, Oklahoma in 1974 and worked at Williams Companies for 26 years, starting out working in the mainframe tape library and eventually in 2002 retiring as a Senior Production Control Analyst. After being together for 11 years Marcia married her ornery husband, Bill Connell, in February 1989 and they were inseparable from then on. Marcia and Bill were married for 29 years and enjoyed dancing, riding motorcycles, and fishing on their pontoon boat at Fort Gibson Lake. Marcia also raised two children, Tim and Tracy, who brought her so much joy. Marcia was a very beloved wife, mother, and grandmother. After retirement she loved to spend her time with her children and grandchildren, traveling with her sisters, playing Bunco with friends, reading romance novels, watching Jeopardy and Wheel of Fortune, going to the casino, and collecting owls and various Coke memorabilia. Marcia was preceded in death by her husband, Bill Connell and her parents, Donald and Ione Craig. She is survived by her children, Tim Weir (Wife, Chase Weir) and Tracy Weir (Husband, Dan Schmidt); her 4 grandchildren, Tori Weir, Alex Weir, Troy Weir and Allen Weir; and her sisters Donna Hill (Husband, Bob Hill) and Penny Dalluge. The family requests that all flowers and notes are sent to Moore Funeral Home - Southlawn Chapel. There will be a viewing from 12 P.M. - 8 P.M. on Monday, September 20th, 2021 and a funeral service at 2 P.M. on Tuesday, September 21st, 2021, both at Moore Funeral Home - Southlawn Chapel. A graveside service will follow at Memorial Park Cemetery, Tulsa. Moore's Southlawn 918-663-2233

We regretfully announce the passing of Marcia Jean Weir-Connell, 74, resident of Tulsa, Oklahoma, on Friday, September 17, 2021. Marcia was surrounded by her family and passed away peacefully in her home. Marcia was born on December 12th,... View Obituary & Service Information

The family of Marcia J. Weir-Connell created this Life Tributes page to make it easy to share your memories.

We regretfully announce the passing of Marcia Jean Weir-Connell,...

Send flowers to the Weir-Connell family.