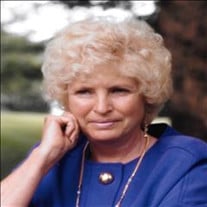 Lysinger - Marcia Lea (Stewart), 82, died Monday, February 14, 2022. She was born January 31, 1940 in Independence, KS, to Charles Russell and Dorothy Frances (Harbert) Stewart. She grew up in Independence and graduated from Independence High School. Marcia later moved to Tulsa, OK where she was an active member of the John Calvin Presbyterian church as well as the Chancel Choir. She worked with her husband Jerry, who owned Kingly Business Forms. They had a love for travel and adventure and went to many places around the world. They were actively involved in the Tulsa SPCA. Every October, she looked forward to attending NEEWOLLAH (in Independence) with her sister, Cyndi, and numerous classmates from IHS. She loved all sports, especially football, and enjoyed watching her OU football and basketball teams. In Marcia's later years, she enjoyed playing Bunco with her group of friends. Marcia was very caring and loved unconditionally. She endured some heartache in her life and yet she continued to be a pillar of strength and brought joy, comfort and love to her family and many friends. She is survived by sister, Cyndi Stewart of Santa Rosa, CA and her brother Frank Stewart, and his wife, Connie, West Linn, OR. She is also survived by her Step-Children: David Lysinger, Nancy Lysinger and Amelia Lysinger. Additionally, she is survived by her Grandchildren: Jerermy Jackson, Jorjan Jackson, Jessica Robinson and Roman Peters. Also her Great-Grandchildren: Alexia, Rayne, Emory, Jace, Emily, Mariah, Tim, Joshua and Hayden as well as numerous nieces and nephews. She was preceded in death by her parents, her brother Ricky Stewart, sister, Kathleen Swift, sons Todd Jackson and Fred Jackson and her husband, Jerry M. Lysinger. A Private Family Service will be held. Moore's Southlawn 918-663-2233 share memories at www.moorefuneral.com

The family of Marcia L. Lysinger created this Life Tributes page to make it easy to share your memories.

Send flowers to the Lysinger family.