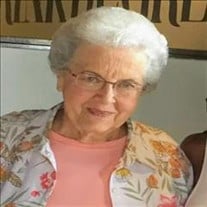 Marian Phillips Bryant A loving wife, mother, and grandmother, strong Christian, church leader, teacher, community volunteer, and world traveler, Marian Phillips Bryant lived a full and happy 92 years. She died at Hillcrest Medical Center in Tulsa on April 26 after a lengthy illness. Her three children - Duree Bryant, Schaumburg, IL; Craig Bryant, Tulsa; Lori Bryant, Tulsa; and her daughter-in-law, Judith Bryant, Tulsa - were at her side when she died. She was preceded in death by her husband, Paul Bryant, and by her brothers, William Gene Phillips and Tom Phillips. Marian was born January 14, 1930 in Weatherford, OK to William Earl and Ruth Phillips. She attended high school in Weatherford, and college at the Oklahoma College for Women in Chickasha, Southwestern State College in Weatherford, and the University of Oklahoma in Norman, where she received a master's degree in music education. She married Paul Bryant of Elk City in 1951. With the exception of a short period of time in St. Louis, Marian was a lifelong Oklahoman. The family lived in Oklahoma City, Tulsa, and Duncan, and then returned to Tulsa in 1973. Marian taught music at public schools in Tulsa and Duncan. Marian was a long time and active member of East Side Christian Church (Disciples of Christ) in Tulsa, and in the last years of her life was a member of Forest Park Christian Church. She was a member of the East Side church board, and was one of the first female elders in that church. She taught both children's and adult Sunday School classes at East Side, played the piano and led the singing for those classes, and for many years - long after her own children were grown - would organize and teach at the church's Vacation Bible School. One of Marian's greatest honors was being selected to lead the statewide Oklahoma Christian Women's Fellowship. In that position, she traveled to large and small towns throughout Oklahoma to speak at church meetings and camps. She also served as a delegate on several occasions to the General Assembly of the Christian Church (Disciples of Christ). Marian became an avid traveler in the years following her husband's death in 1991. She joined International Christian Women's Fellowship trips to Japan and Germany, and visited her son and daughter-in-law in Yaounde, Cameroon; Ottawa, Canada; and Jerusalem while they were working for the U.S. State Department in those cities. She also traveled to Jordan, Turkey, and Egypt. It can safely be said that wherever she traveled in the world, Marian never met a stranger. Along with her church involvement, Marian delivered meals for Meals on Wheels in Tulsa for many years, and in recent years was a member of the Hyechka Club of Tulsa. She closely followed local and world events, reading the Tulsa World and watching the local and national news every day. Marian was a staunch Democrat her entire life; one of her proudest moments was attending the inauguration of Barack Obama on January 20, 2009, shortly after her 79th birthday (for a woman who disliked cold weather, this was a notable accomplishment - the temperature at the time of the ceremony was 16 degrees). She was fiercely independent, always put the needs of others ahead of her own, and lived in her own home until her final days. In addition to her children and daughter-in-law, Marian is survived by her grandchildren, Malia Bryant, Carter Bryant, and Stephanie Lewis. The family held a private graveside service on April 29, and a celebration of Marian's life will be held at Forest Park Christian Church on June 11 at 2:00 PM. In lieu of flowers, the family asks that memorial gifts be made in Marian's name to the scholarship fund at Phillips Theological Seminary in Tulsa, https://ptstulsa.edu/giving/ or to Meals on Wheels of Tulsa, https://www.mealsonwheelstulsa.org/donate Marian loved church music and singing, and as she gracefully left her earthly life the words of a favorite hymn came to mind: No storm can shake my inmost calm While to that rock I'm clinging Since love is Lord of heaven and earth How can I keep from singing?

The family of Marian Phillips Bryant created this Life Tributes page to make it easy to share your memories.

A loving wife, mother, and grandmother,...

Customized sympathy cards. Mailed for you.