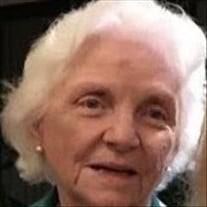 Born to Charles and Mary White of Stroud, Oklahoma, Marie Elizabeth White entered this world on September 7, 1930. The family attended the Methodist Church. She married Meredith E. Norris, known as Gene, on July 1, 1950, after meeting him in Edmond while going to Central State College. She and her husband loved the Tulsa Ice Oilers and belonged to the Ice Oiler Booster Club. They traveled in summer to many states to visit family members. They were married thirty years. Gene passed away in July 1980. Marie was preceded in death by her parents and three siblings, Mary Edna Bailey, Charles White, Jr, and Ralph White. She is survived by her sister, Elnora (Nonie) Bowen and by her daughters, Micaela Chisum and Michelle (Don) Montalbano. In addition, she is survived by her grandchildren: Lauren Montalbano, Natalie Montalbano, Kara Chisum and Matthew Chisum. Her great-grandchildren are Zachary Morris, Aubrey Morris, and Micah Morris. To say that Marie had a strong belief in education is to put it mildly. In her youth, she even lived away from home to complete her schooling. Marie graduated in 1946 from Sapulpa High School and received her B.S. and M.S. in Education from Central State College. She constantly improved her teaching skills by earning sixty credit hours past her M.S. degree. By the time she retired in 1986, Marie had taught thirty plus years in Tulsa Public Schools and other Oklahoma school districts. Not one to be satisfied sitting on the couch, she continued her volunteer work with numerous organizations after retirement. Marie held offices in the Sapulpa Nancy Green Chapter of the Daughters of the American Revolution. In addition, she was a member of other lineage groups. She had a keen interest in American History and was a fervent supporter of the Veteran community. She volunteered at the Childers Veterans Affairs Outpatient Clinic where she received the Volunteer of the Year Award. She also served in several positions in Kappa Kappa Iota, a national professional organization for educators. Her activities, besides community service, included gardening, reading, and being with her grandchildren. Often, she helped relatives through a time of need because of her belief in supporting family. Her family and friends knew of her love of music, both singing and playing piano. She enjoyed singing with the Sweet Adelines in Tulsa. Marie was well-travelled. Her travels were mostly with the DAR & KKI groups to convention and group trips to historical sites. She also visited the UK with her family. In lieu of flowers, please consider donating to The Coffee Bunker which is a Veteran Service organization that Marie worked with. She will be laid to rest at Memorial Park Cemetery Chapel at 2 PM, Saturday, May 7th. Graveside services will be private. Memorial Park Cemetery Chapel is located at 5111 S. Memorial Drive, Tulsa, OK 74145 Moore's Southlawn 918-663-2233

Born to Charles and Mary White of Stroud, Oklahoma, Marie Elizabeth White entered this world on September 7, 1930. The family attended the Methodist Church. She married Meredith E. Norris, known as Gene, on July 1, 1950, after meeting him... View Obituary & Service Information

The family of Marie Elizabeth Norris created this Life Tributes page to make it easy to share your memories.

Send flowers to the Norris family.