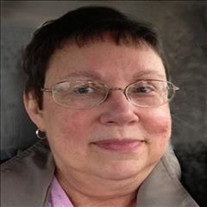 Martha Ann Pulver was born January 9, 1949 in Tulsa, Oklahoma to J.D. and Betty Schroeder and passed peacefully surrounded by her family on February 21, 2022 at the age of 73. Martha was raised in Tulsa where she lived her entire life. After attending Tulsa Central High School, she graduated from Oklahoma State University's Medical Technology Program at the top of her class. Martha spent the majority of her career at St. John Hospital's Regional Medical Laboratory (RML), where she was known for her technical expertise and attention to detail. Her friendships with coworkers were a blessing throughout her accomplished career. Martha was the proud mother of Karen and Stephen. When they were young, she volunteered as a leader with Karen's Girl Scout Troop and Stephen's Cub Scout Den. Martha enjoyed watching Karen and Stephen march in Union's Renegade Regiment. Later, she loved cheering on grandchildren Morgan in dance and Garrett in hockey. Martha possessed an unshakable faith, growing up in St. Paul's United Methodist Church and later a member of Asbury United Methodist Church and Will Rogers United Methodist Church. Her intelligence and wit always gave her family and friends a smile. Martha enjoyed crafting, model railroading, vacationing, watching classic movies, and visiting with her lifelong friends Donna, Gina, and Janet. Martha was preceded in death by her parents and brother Larry Schroeder. She is survived by her loving and dedicated children, Karen and husband David Long of Rochester, NY and Stephen Pulver of Tulsa; grandchildren Morgan and Garrett Long; brothers, John David and wife Elizabeth Schroeder of Wichita Falls, TX, Daniel and wife Jeanne Schroeder of Stillwater, OK, and Bob and wife Tess Schroeder of Sapulpa; sister-in-law Lisa Schroeder of Tulsa; along with many beloved cousins, nieces, and nephews. Viewing will be held on Friday, February 25th from 12-8PM at Moore Funeral Home - Southlawn Chapel, 9350 E 51st St. Tulsa OK. Funeral Services will be held at 2PM on Saturday, February 26th at Asbury United Methodist Church, 6767 S Mingo Rd, Tulsa, OK Moore's Southlawn 918-663-2233

Martha Ann Pulver was born January 9, 1949 in Tulsa, Oklahoma to J.D. and Betty Schroeder and passed peacefully surrounded by her family on February 21, 2022 at the age of 73. Martha was raised in Tulsa where she lived her entire life. After... View Obituary & Service Information

The family of Martha Ann Pulver created this Life Tributes page to make it easy to share your memories.

Send flowers to the Pulver family.