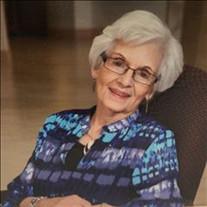 Mary Gebhart Barron passed away peacefully July 1, 2021. She was born July 12, 1916 to Charles and Lura The oldest of three children, she attended Tulsa Public Schools and The University of Tulsa. She was a cheerleader and a member of the Phi Mu Sorority. She met Dr. Lloyd Barron while at TU and they were married in 1946. She temporarily filled in as the office manager in his dental practice, but it became a permanent role for the next 25 years until their retirement. They were married for 55 years until Lloyd's death. Mary had a wicked sense of humor, which she needed to raise their three sons. She organized family get togethers over the years with her siblings and their families, making lasting memories for all the cousins. She was an avid golfer in LFWGA and Nine Holers, playing until she was 90 years old. She also played bridge in several groups, was a member of the Singing Ambassadors at Asbury United Methodist Church, where she served as a librarian. She was a member of the Seekers Sunday school group where she served as treasurer. She volunteered for St. John''s Hospice for 7 years and provided meals for the Ronald McDonald House. She was preceded in death by her husband, Lloyd and her daughter-in-law, Elaine. She is survived by her sons: Lloyd, Charles and wife, Karen, Kurt and wife, Lenice; five grandchildren: Diane, Matthew, Grant, Heather and Waco, four great-grandchildren; Nicholas, Natalie, Aiden and Evelyn; many nieces and nephews, great nieces and great nephews and dear friends who remained close will greatly miss the generous, kind, funny and fiercely independent woman. A private graveside service is planned for the family. In lieu of flowers, friends may contribute to a charity of your choice. Condolences may be left online @ www.moorefuneral.com. Moore's Southlawn 918-663-2233

Mary Gebhart Barron passed away peacefully July 1, 2021. She was born July 12, 1916 to Charles and Lura The oldest of three children, she attended Tulsa Public Schools and The University of Tulsa. She was a cheerleader and a member of the... View Obituary & Service Information

The family of Mary Gebhart Barron created this Life Tributes page to make it easy to share your memories.

Send flowers to the Barron family.