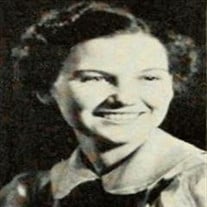 Mary June Booker Burnett of Wynne, AR., died in Tulsa, Okla., on Tuesday, June 1, 2021, at the age of 102. She and her twin brother, Buddy, were born in Jonesboro, Ark., on August 13, 1918, to parents Jesse Isom and Elta Seivert Booker. Mary June grew up in Jonesboro and was a 1936 graduate of Jonesboro High School. After graduating from Arkansas State in 1940 with a degree in history, she taught for a year in a one-room schoolhouse in Roe, Ark. As neither teaching nor rural living were her calling, she moved to Wynne in August 1941, to work for the Farm Security Administration. In Wynne, she met Roland Burnett, a local pharmacist and owner of Burnett Drug Co. During World War II, Mary June moved back to Jonesboro and worked for the Internal Revenue Service to stay with her parents while her younger brother, George, was away in the Army, but in 1947 she married Roland and returned to Wynne. There they raised their family and operated Burnett Drug Co. for more than 40 years, during which time they opened the first Hallmark Thoughtfulness Shop in eastern Arkansas. Mary June was devoted to her family and to the First United Methodist Church in Wynne, where she was a longtime Sunday school teacher, board member, and tireless kitchen volunteer. She was active in Girl Scouts, led several downtown Wynne improvement and beautification projects, and directed a renovation of her beloved Giboney-Robertson-Stewart House, which resulted in its placement on the National Register of Historic Places. Preceding her in death were her parents; her husband, Charles Roland Booker; her twin brother, Max Seivert "Buddy" Booker, who died of polio when they were eight; and her brother, George W. Booker. Mary June is survived by four children, Anne Burnett Darnaby of Little Rock; Dr. Charles R. Burnett, Jr. (Susan) of Germantown, Tenn.; Nancy Booker Burnett of Tulsa; and Robert Isom Burnett (Vicki) of Little Rock; six grandchildren, Kathleen Burnett Ligon of Austin, Texas; Charles R. Burnett, III and Matthew A. Burnett, both of Memphis, Tenn.; John W. Burnett of Austin, and Jesse B. Burnett and James R. Burnett of Little Rock; and three great-grandchildren, Virginia, Lilian and June Ligon. Graveside services will be at 2 p.m., on Wednesday, June 9, 2021, at Cogbill Cemetery in Wynne, AR., with her nephew, Reverend J. E. Wadkins officiating. In lieu of flowers, the family requests memorials to the Wynne First United Methodist Church or to St. Jude Children's Research Hospital in Memphis. Moore's Eastlawn Chapel (918) 622-1155

The family of Mary June Burnett created this Life Tributes page to make it easy to share your memories.

Send flowers to the Burnett family.