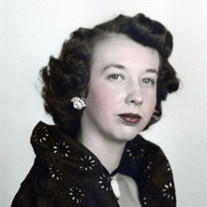 Mary Joan (Griffin) Leport, age 93, our beloved mother, died in Stillwater, OK on September 17th, 2021. Born April 21st, 1928, in Tulsa where she lived until recently. Predeceased by her husband Louis Leport. Leaving behind children, Ellen Leport Medlock of Tulsa, OK, Michael Leport and wife Jonnie Leport of Wichita, KS, Richard Leport and wife Deanna Leport of Stillwater, OK. Grandchildren Stephen Medlock and wife Lindsey of Aldie, VA, Kathryn Medlock Davis and husband Alex of Fort Myers, FL, Anna Leport of Stillwater, OK and great-granddaughter Harper Medlock of Aldie, VA. She worked at American Airlines in its early days where she met Lou. They married in 1951, and they were among the original parishioners of St. Pius X Catholic Church in Tulsa. She was a devout Catholic and devoted her life to her family. Mary Jo loved playing Bridge, and volunteered at St. John Hospital until the age of 90. We will miss her unmatched sense of humor which she maintained until the very end. In lieu of flowers the family requests donations in her memory to St. John Hospital Auxiliary, 1923 S. Utica Ave, Tulsa, OK 74104. Private service due to Covid. Moore’s Rosewood Chapel

The family of Mary Joan Leport created this Life Tributes page to make it easy to share your memories.

Send flowers to the Leport family.