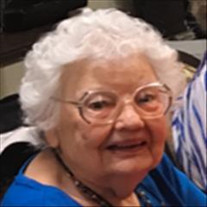 Mary Regina Smith, also known as Aunt Jean. We all loved Aunt Jean and we are gathered today not because she died but because she lived. We turn to the scriptures to guide us and give us strength. From Ecclesiastes 3 we learn there is a time for everything. (1) For everything there is a season�.. a time to be born � October 29, 1924 in Tulsa, Oklahoma on the Danielson Farm to Chloe Elizabeth Headrick Martin and Frank Aldmire Martin. Jean was the third of eight children born to this couple. (2) A time to plant�� living on a working farm in Olney, Oklahoma was just that "chores". Jean graduated from Olney High School in 1942. Then, with World War II, a job in McAllister, Oklahoma at the Savannah Ammunition Plant. Next Douglas Aircraft Company in Tulsa, Oklahoma not as �Rosie the Riveter" but as an accountant. Shell Oil Company was next before she moved to California to working for the Motor Vehicle Division of California. (3) �.. and a time to laugh�. Aunt Jean married Patrick George Smith in September of 1970 and off they went to Vermont. They lived several places while Uncle Pat was buying marble and granite for government buildings in Washington D.C. When retired they came to Tulsa a lot to share meals with the Bells and Penny Poker Games. Married for 18 years. (4)�. A time to build up�. Aunt Jean was a frugal shopper. She could look at an outfit in a magazine or catalog and free- handedly cut a pattern and sew her creation. She was always dressed to the �nines". (5)�. A time to cry a time to grieve and a time to die�. July 24, 2021 at the age of 96 years, 8 months and 26 days. Jean was preceded in death by her beloved husband, Patrick Smith and six brothers and sisters. She is survived by her sister, Florence Amelia Mousner of Olathe, Colorado, nieces, Chloe Fran (Bell) Fay, husband Douglas Derek Fay of Tulsa, Mary Virginia Bell of Tulsa, Melinda Lea (Martin) Bennett, husband Brad of Tulsa, Ginnie Dee (Mousner) Schlagel, husband Bruce of Sentinel, Colorado, nephews, Neal Martin, wife Debbie of Seminole, Oklahoma, Stacy Lee Mousner, wife Kathy of Durango, Colorado, Frank David Martin of Ada, Oklahoma and numerous great nieces and great nephews. Donations can be made to a charity of your choice. Funeral Service: 2:00 PM Tuesday, July 27, 2021 at Moore's Eastlawn Chapel..

Mary Regina Smith, also known as Aunt Jean. We all loved Aunt Jean and we are gathered today not because she died but because she lived. We turn to the scriptures to guide us and give us strength. From Ecclesiastes 3 we learn there is a time... View Obituary & Service Information

The family of Mary Regina Smith created this Life Tributes page to make it easy to share your memories.