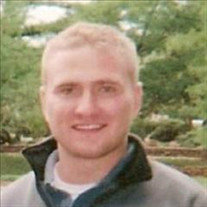 Mason Ross Mullennax was born June 2, 1982, to Scott and Salle Mullennax, and he died September 14, 2021. He was raised in Edmond, Oklahoma before moving with his family to Broken Arrow, Oklahoma in 1994. Mason was a graduate of Broken Arrow High School, and he earned a degree from Oklahoma State University in marketing and history, with Suma Cum Laude honors. Mason worked in IT and as a private tutor of history, English, and research with college students. Mason enjoyed reading and had a special interest in WWII history, as his Papa Virgil was a paratrooper during the war. Mason was a good person. He was loving, kind, tender-hearted, and he gave wonderful hugs. Mason's greatest blessings in life were his nephew and niece, Braden and Kathryn. They were the brightest shining stars in his life. Mason will be dearly missed by all who love him. He was preceded in death by his grandparents, Virgil and Corky Mullennax and B.E. Freeman, and great-aunt, Chloe Jones. He is survived by his Grandma Helen Freeman, parents, Scott and Salle Mullennax, his sister, Megan (Christine) Bryans, Braden and Kathryn Bryans, and Noah Lewis. His uncles and aunts, Lester and Marlena Freeman, Tom and Teresa Freeman, Joe Freeman and Michael Pone. His cousins, Risa O'Bryhim and Caroline and Lorin Carter, Jennifer Martinez and Gabriel and Garrison, Jessica and Anthony D'Errico and Eleanor, Emily and Eli, Julie and Paul Anholt, and Mallory and Jared and Jennifer Freeman, Tori, Tessa and Tara, along with his godparents, Peter and Nora Hunt Johnson. A funeral service will be held Friday, September 24, 2021, at 1:00 p.m., at Saint Benedict Catholic Church, 2200 West Ithica Street, Broken Arrow, Oklahoma. If you wish, in lieu of flowers, make a donation to the charity that is close to your heart in Mason's name. Moore Funeral Home - Southlawn Chapel 918-663-2233

Mason Ross Mullennax was born June 2, 1982, to Scott and Salle Mullennax, and he died September 14, 2021. He was raised in Edmond, Oklahoma before moving with his family to Broken Arrow, Oklahoma in 1994. Mason was a graduate of Broken Arrow... View Obituary & Service Information

The family of Mason Ross Mullennax created this Life Tributes page to make it easy to share your memories.

Send flowers to the Mullennax family.