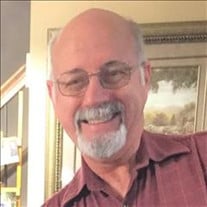 Michael Rene DeLorey was born on February 24, 1957 in Boston, MA. He was the second of three children born to Dorothy and Jim DeLorey. The family included an older brother and a younger sister; Mike was born into a military family and moved several times during his young life, ending up in Moses Lake, Washington where he graduated from high school. Mike began his military service after high school, entering the U.S. Army in 1975. He was trained as an aircraft mechanic, including maintaining attack helicopters. He received an honorable discharge from the Army as an Sgt E-5 in 1978. Mike moved from Washington to Tulsa, OK in 1981 to attend Spartan Aeronautics, with every intention to return to Washington. He received his Airplane and Power Plant License but decided to remain in Tulsa. Mike began his full-time work with the Oklahoma Army National in 1982. He was discharged from the Guard in 1993 and worked as a contractor for Sikorski International Products in Saudi Arabia and other companies using his technical skills. Along with Mike's decision to remain in Tulsa, he found Sheridan Road Baptist Church to be a place where he made friends and felt welcome. It was there he found a genuine faith in Christ that changed his life. He also met his future wife, Denise. So, Washington was no longer the goal. He had found his home in Tulsa. Mike has been a man of commitment to his word and has always worked hard toward his goals. He and Denise have been married for 38 years. Mike has worked as a Lead Technician for Muncie Power in Tulsa for the past ten years and was a valued employee, a good leader, and had many friends. One of his greatest loves has been working with dogs. He and Denise have had labs throughout their marriage. Mike has trained dogs at Tulsa Dog Club since 2005, and has won many awards and ribbons with their dogs, Luke, Peace and Haley. Mike was preceded in death by his parents and brother, Donald DeLorey. He is survived by his sister, Sharon Benjamin; his wife, Denise; her extended family and a host of close friends, all of whom will miss his presence, infectious laugh and friendship. The viewing is 8am-2pm and visitation from 1pm-2pm on Wednesday, December 8, 2021 with the funeral service to follow beginning at 2pm at Moore's Southlawn Chapel, 9350 E. 51st Street, Tulsa, OK. Interment will follow the service at Memorial Park Cemetery with military honors.

Michael Rene DeLorey was born on February 24, 1957 in Boston, MA. He was the second of three children born to Dorothy and Jim DeLorey. The family included an older brother and a younger sister; Mike was born into a military family and moved... View Obituary & Service Information

The family of Michael Rene DeLorey created this Life Tributes page to make it easy to share your memories.

Send flowers to the DeLorey family.