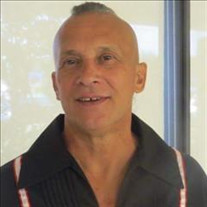 Michael Douglas 'Doug' McHenry of Tulsa, OK stepped into heaven the evening of December 4, 2021, at his home in Tulsa, OK. Doug was born March 18, 1957, in Claremore, OK to James David McHenry and Christine Estelle Hood McHenry. He was an Optical Technician by trade. Doug was a natural gifted wrestler and graduated from East Central High School where he excelled at wrestling and was awarded a scholarship for wrestling from Oklahoma State University. He also attended college at Oklahoma Central University in Edmond, OK. Doug was on the Olympic Wrestling team in 1980 when President Jimmy Carter boycotted the 1980 Summer Olympics. Doug had a passion for animals and especially dogs and cats. His love for his Pug dog named Zeus was incomparable and unconditional. He was always helping by caring and feeding of other people's dogs and cats. Doug was a kind, compassionate person and while he also could be pretty ornery, he was a loving person and would make homemade Mother's Day and Christmas cards for his aunts. Doug was very proud of his Muscogee Creek ancestry and heritage. He once took a Muscogee Language class each week for a period of six weeks and was a member of the Tulsa Creek Indian Community. He is survived by his children Michael Lee and Nicole Lee Edwards; granddaughter, Kali Lee; brothers James D. McHenry and wife Patti from Bartlesville OK, Patrick O. McHenry of the home and sister Cindy Stone and husband Mike of Bixby, OK. His Aunt Vickie of Tulsa, OK who was his bonus Mom and a score of relatives and friends. He had a special relationship with his uncles, aunts, nieces, nephews, and cousins. He is preceded in death by his mother, Christine Hood McHenry; maternal grandparents Irving and Velma Hood; and paternal grandparents, Lewis and Gladys McHenry; and granddaughter, Baby Grace Lee. A wake will be held at 7:00 P.M, Thursday, December 9, 2021 at Haikey Chapel UMC, 8815 E. 101st, Tulsa, OK 74133. Funeral Service will be 1:30 PM, Friday, December 10, 2021 at Haikey Chapel UMC, Tulsa, OK. Moore's Southlawn 918-663-2233

Michael Douglas 'Doug' McHenry of Tulsa, OK stepped into heaven the evening of December 4, 2021, at his home in Tulsa, OK. Doug was born March 18, 1957, in Claremore, OK to James David McHenry and Christine Estelle Hood McHenry. He was an Optical... View Obituary & Service Information

The family of Michael "Doug" McHenry created this Life Tributes page to make it easy to share your memories.

Send flowers to the McHenry family.